The Art of Modern Man 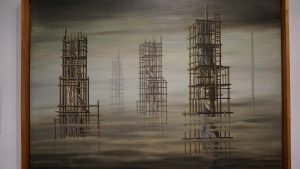 I’ve never understood modern art. Last week when we were visiting the MET, one brother leaned toward me and whispered, “It looks like a waste of good paint.” What could I say to that? But while somewhere staring quizzically, I felt something stir in my heart. And as I continued through the rest of the museum, I discovered something that changed my view of modern art forever. Modern art is a priestly art.

When I reluctantly turned the corner into the modern art section of the museum, I prepared myself for a bombardment of random and unintelligible works. I entered the first room and scanned the walls for something interesting. I saw a description of the exhibit on the far side of the room. It said that for the modern artist it is not enough to simply represent nature. (That’s what the world has been doing since the 14th century.) They’re not aiming for something merely “different”, but for something “beyond”. It said that they try to express the “Psyche”, their inner self.

“Well let’s see what the psyche has to say.” I thought to myself as I moved to the first piece of art. I didn’t look at the plaque. I examined the painting, not wanting to be influenced by someone else’s description. Scaffolding rose out of a thick fog of mellow grey and sepia tones. I felt “pointlessness” and “helpless depression”, “disillusionment with life” perhaps… Once I felt that I had experienced the psyche, I looked down at the plaque: Tomorrow is Never (1955) by Kay Sage. This was one of her first paintings after the sudden death of her husband five months earlier. It was one of her last major works before committing suicide. I looked back at the painting. A gut-wrenching pain lurched within me. I felt my heart flop out of my chest onto the floor. Like a dark Russian novel, the tragedy seemed as thick as the fog in the painting. I had experienced the psyche.

This is precisely the deeper aim of the modern artists. As future priests, we should thank them for taking up that aim, because they have opened up a window into the real heart of man. It is easy for us to pace through the galleries of Vermeer and Velazquez and “like it”. Just so, it is easy for a priest to sit back and admire all that is “right and just”. But a priest that is unable to reach into the muck of sinful souls and encounter the heart buried within is not a priest like Christ.

Our Lord was just fine in heaven. Everything was clear, bright, and reasonable. But he loves man. He would not leave us alone. He plunged into the grime, the sludge, into all that was broken, dark and completely unreasonable.

Br. John was born and raised in Rogers, Minnesota and has been a Legionary of Christ for three years. I am currently studying Classical Humanities at Legion of Christ College in Cheshire, Connecticut. I entered the Apostolic School in Rolling Prairie, Indiana in 2008, and after graduating High School entered the Novitiate of the Legionaries of Christ in Cheshire, Connecticut. I consecrated myself to God as a Legionary religious in September 2017.
View all posts by Br. John Sester, LC →
This entry was posted in RC Live. Bookmark the permalink.

One Response to The Art of Modern Man