The MET Gala and the Indelible Mark on our Souls 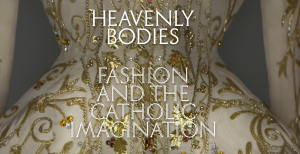 Considering how volatile opinions are about the MET Gala the other night and the fact that I’m Canadian, putting my own opinion out here publicly the morning after the night before either means I am sleep deprived by the demands of a May end-of-the-school-year schedule, or that I feel strongly enough about what I think God is teaching me that I can get over any fear of sharing my thoughts.

I watched the opening of the new exhibit at the Metropolitan Museum of Art with interest. Entitled Heavenly Bodies: Fashion and the Catholic Imagination, I wanted to see what this meant both to the curators who had the idea, and to the Church who lent the museum over 50 religious articles and vestments from the Vatican Museums collection.

Monday’s 2018 MET Gala opened the exhibition and took this theme.  The MET Gala is viewed as the Oscars for the New York celebrity crowd, complete with red carpet.  This year, Cardinal Timothy Dolan attended as well, in light of the MET’s partnership with the Church.

As the gala began, I watched my social media feed to see the dresses and statements that appeared.

Some of them were sublime (go check out Ariana Grande’s gown with art from the Sistine Chapel on it, Zendaya’s homage to St. Joan of Arc, Blake Lively’s elegant red and gold dress and many, many more), some of them were revolting (I am not even going to name names. You’ve probably already seen them), although I realize that the media only showcased a small number of the more attention-worthy dresses and attendees.

I saw people who decided to make a statement with their provocative and obscene clothes, and other people who dressed with the elegance that religious art inspires.

My first reaction was of sadness and anger- anger at people who scream cultural appropriation when a girl wears an Asian inspired prom dress, but who mutilate the attire of a cardinal into a provocative mini dress. I wanted to post to the world #myreligionisnotyourcostume!   A snarky voice in my head told me they would never be this disrespectful of an Islamic themed event. 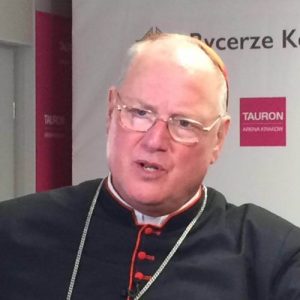 However, as God usually does when my emotions threaten to dominate me, he insistently drew my attention to the gentle voice of the Spirit in my soul that was telling me to wait and listen more carefully to what he was doing, and that I had more to understand.

The next morning I read a news article  with quotes from Cardinal Timothy Dolan:

Dolan described the scene inside the Met where he greeted hundreds of the evening’s starlets – all of whom seemed “genuinely happy to see me,” he told Crux – as a time in which he was overwhelmed with individuals approaching him to talk about their Catholic roots.

“A lot of people were honest to say that they’ve been less than faithful to the Church of their origin,” said Dolan. “But an evening like this brings back lots of happy memories, and I thought, my, what a celebration of what we call the evangelization of culture.”

Evangelization of culture – an opportunity to offer a positive vision of what the Church is for, rather than what it is against – is one of the hallmarks of Dolan’s ministry says, Bishop Robert Barron.

“I did not find the spirit of the evening to be offensive or blasphemous at all,” he said.

“Was some of it edgy? Yes, but I never met any person that seemed to be snippy or snotty about the Church, or who intended anything to be offensive.”

“We could have had a lecture at the museum on the Catholic imagination and not too many people may have shown up, especially the crowd from last night. But when you do an evening like that, you get everybody,” he told Crux.

“Boy, you talk about the public square – with some of the movers and shakers who were there – and they’re reminded of positive memories of the Church and of devotions, prayers, traditions, and liturgies, as many of them told me they were. This could only be for the good of the Church.”

“I was really happy to have been there,” Dolan added. “If this helps people rediscover those roots, then hallelujah, it’s a winner.” 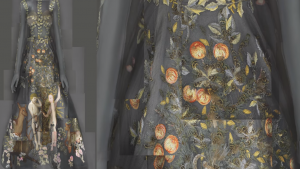 A dress from the Exhibition

It reminded me of something Fr. Thomas Gaunt, S.J., said when he addressed the 2017 Convocation of Catholic leaders, explaining the changing landscape of the Church.   He introduced us to research that the United States Conference of Catholic Bishops had done to try to understand what it meant to be Catholic in America.

The research showed that in a church of 75 million American Catholics, 25 million do not go to Mass regularly, but still had a strong interior need to self-identify as Catholics.

Why?  Pope Francis explained it in his Wednesday Audience this week, two days after the MET gala:

“Dear brothers and sisters: In our continuing catechesis on Baptism, we now turn to the central action of the baptismal rite. Through the pouring of water and the invocation of the Blessed Trinity, we are “immersed” in the mystery of Christ’s death and rising to new life. Thus reborn, we become a new creation, passing from the corruption of sin to eternal life. In Christ, and by the outpouring of the Holy Spirit, we are made adoptive children of the Father, with the Church as our spiritual mother. This relationship is definitive and is sealed by an indelible mark on the soul.” 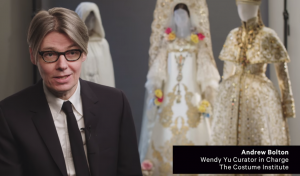 Andrew Bolton, curator at the Metropolitan Museum of Art

Baptism.  Baptism makes us Catholic not by our fidelity but by God’s fidelity.  This indelible mark isn’t destroyed by sin, because Christ triumphed over sin.

This indelible mark came to surface in some of the MET Gala attendees like a familiar and forgotten song from their childhood that perhaps made up more of their identity than they realized.  I pray this is also the experience of the thousands who will visit the MET in coming months and see the treasures from the Vatican museum, and the art they influence.

Remarkably, Andrew Bolton, a curator of the Heavenly Bodies: Fashion and the Catholic Imagination exhibition, had a similar insight. In a short introduction video on the MET website he said

“Fundamentally, designers who were either raised or educated Catholic have a metaphorical inclination that defines their creative impulses.  Designers certainly gravitate toward religious imagery for provocation. On the whole, I’d say that the majority of designers engage with it for nostalgia and for reasons of beauty. I hope that one of the takeaways from the exhibition is that Catholicism as a belief system has inspired some of the most extraordinary works of art.”

This “metaphorical inclination,” this way of seeing the world as something with intrinsic meaning that exists deeply below the surface, seeing it through the prism of our faith, comes from the indelible mark.

In the United States, at the heart of culture and the arts, a Catholic conversation has been opened.  For Cardinal Dolan, this is exciting!  For me too, although I also see it as perhaps a bit scary because the control freak in me knows there is no way for us to guide this conversation to a perfect conclusion. However, that’s God’s job, not mine.  Cardinal Dolan is trusting in the action of the Holy Spirit.

On Facebook, someone commented on my friend’s post about the Gala, “Any time we bring out treasures of beauty the devil will mock them. Its degrading to those who mock but takes nothing away from the true beauty itself. It’s proof of the authenticity or beauty, and also of his inability to create true beauty.” 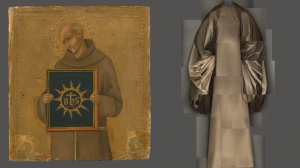 A garment in the exhibition inspired by Catholic art and tradition

So true.  The outfits insulting the Church should cause moral outrage, but moral outrage shouldn’t stop us from exposing the beauty of the Faith to a world that is starving for it.  The offensive outfits are wounds worn on the outside.  Maybe by being exposed in the beautiful light of the faith, they can come to be healed.  God can do anything.

Wrong is wrong, right is right. I’m not clouding the two. Our culture is majorly in need of Catechesis and formation.  However, I do see something else- a place for mercy and evangelization, for sharing the beauty of faith with a world that is blinded and distorted by ugliness. This is something I think Christ wants to awaken Catholics to in today’s post-Christian world.

I admire Cardinal Dolan’s brazen hope and joy at encountering people who are interacting with the Church because of this event.  I pray for a similar holy audacity that will protect me from being imprisoned by outrage and will enable me too, to encounter people where Christ dares to be present.