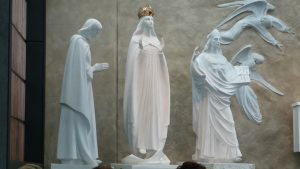 As we saw before, I asked men to tell me the stories of how Mary helped them. I continue today with three stories as the second of three parts.

(4) In February of 2013 I went to Ireland on pilgrimage. I visited the Marian Shrine of Knock, and I decided, since the weather was nice, I would climb nearby Croagh Patrick, a mountain associated with St. Patrick. A priest at Knock told me the total hike should only take two hours. So after visiting an abbey, I make my way to Croagh Patrick and begin my hike at 4 pm expecting to be down again a little before sunset at 6 pm.

Much to my surprise, the cone near the top was covered in loose rock fragments, making every step treacherous. So, instead of being up and down in two hours, it took me two to get up. As I enjoyed the clear day view with zero clouds from the top of the mountain and saw how low the sun was in the sky, I knew that I would not get down with sunlight remaining. As my heart sank at the difficulty ahead of me, I turned east to return the way I came, and there on the horizon a full moon had just risen. I remembered the symbolism of the moon reflecting the light of the sun like Mary reflects the light of her Son Jesus. I begin the descent and pulled out my rosary to pray on the way down.

I thought to myself about Mary’s protection as I contemplated both the mysteries of the rosary and the providential moonlight. Though completely dark, the moon lighted up my path down the mountain.

As I drew near the parking lot, I note a purple glow coming from somewhere I hadn’t seen when I arrived: investigating it, I found a shrine to Mary with a statue of Our Lady, Queen of Peace. That confirmed it for me that Mary had had my back and saw me down the mountain safely. After that, I began to take more seriously what people had been telling me: that Mary has always been keeping her eye on me. –Fr Christopher, OFM

(5) My father Frank was taken at gunpoint and held hostage for 9 days in the forests of Mindanao, Philippines. He and Ma always prayed the Rosary and were always active in Church. For 9 days he stayed strong and clung to his faith, prayed, and asked Mary’s intercession and the Lord of Pardon for protection. Almost on the verge of giving up, he asked God if he dies that his loved ones see him. That night Mary showed him a beautiful red rose in his dream; thus giving him hope. Then he was set free and got home. Now 89, he is up daily at 03:30 am and prays for 2 to 3 hours daily. Praise God! –Carmel

(6) “I want a divorce” my wife began our counseling session last March. This came after years of addiction on my part that I occasionally tried to stop: When she discovered the last plummet into the addiction, she left. After that counselling session, I realized I had not been seeking God’s help, and was ashamed. I began to pray, went to confession for the first time in 25 years, and began to attend Mass and receive the Eucharist again.

A month after that last counselling session, she reiterated her desire for a divorce, while I decided to honor Mary with a daily rosary and Mass in May. One day, driving home, my car was suddenly and inexplicably filled with the scent of roses.

On June 1st, having completed my promise of daily rosaries, and daily Mass throughout May, and on the last day of my first novena to Our Lady, Undoer of Knots, while showering, and humming “Hail Holy Queen,” which had been stuck in my head all month, I was suddenly filled with an overwhelming sense of joy, calm and resolve. Somehow, downloaded into me was the knowledge that Mary was present with me in the room. I did not hear a voice, but an absolute fact appeared in my mind, and has been unshakable since: “Mary is taking care of it.” I cried, and sang, and leaped joyfully in the air (once out of the shower) and thanked God for this grace, and Mary for her intercession.

Since then, the depression I’ve suffered from since childhood has been gone. I have had days of great difficulty and sadness, but not depression. –Duncan

Note: I corrected minor errors and shortened stories but otherwise they are the words of the individuals.