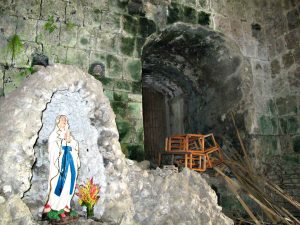 Mary is mother to us all. I wished I could find more stories of her helping men as some men I’ve met have had a hard time relating to her. When Crossbound Rosaries offered me a free manly paracord rosary, I decided instead of taking it myself, I’d ask men to submit stories of Mary’s intercession and give it to the best story. I got a bunch of entries and here are the best nine taken from various ages, vocations and locations. I will present three stories in each of three parts over the next few days.

(1) I met the Assistant Chaplain of the Our Lady of Fatima Church in 2000 and he encouraged me to enter the seminary. Initially I did not entertain the idea because that meant leaving my work in the government and defeating financial security for the rest of my life.

The assistant chaplain at Our Lady of Fatima Church kept suggesting I “consult” our Lady of Fatima. For weeks, I prayed for mercy to help me decide. I finally told myself “God will provide all my needs” and entered the seminary in June 2008 at the age of 37.

After philosophy, I was told I probably did have a vocation and went home to care for my cancer-stricken father devastated.

For three years, I prayed relentlessly to Our Lady of Fatima to help me continue my vocation. Finally, I wrote the seminary to reconsider me. The new seminary rector accepted and directed me to report immediately. My bedridden father told me to go back…we both cried. He died just after me “I Love You” as a text on August 10, 2013. –Zeus

(2) In 1998, my son had just turned two. He had gotten a cold and it developed into the croup: one night, it had gotten so bad that he was barely getting any oxygen. He was in the middle of a fit, and my wife was on the phone with the doctor who told her to get him to the emergency room immediately. While she was on the phone, I put my hand on my son’s chest and pleaded with Mary to help him right here and now, and promised to raise him to be a good “Son of Mary.” Immediately, and I mean immediately, his coughing calmed. We still had to take him to the emergency room, but at least he was getting air much better than he had been.

It is the only time in my 52 years (he is almost 20 now), that I can say, without any doubt, that a prayer was immediately answered.

I know that there are coincidences, but here my baby was hacking up a lung and it calmed the second I said that prayer. This was no coincidence. –Paul

(3) I suffered a drunken father, a grandma who practiced occult magic, abuse, an animosity-filled divorce taking 3.5 years to decide, and I was eventually taken to a shelter with 100 other teens. Becoming an adult wasn’t much better: I was committed to a residential psychological facility for 4.5 years and had gone through eight jobs and two wives by 33. I’ve dealt with OCD, panic attacks and Social Anxiety Disorder: modern drugs helped with anxiety not with sexual addiction.

Eight years ago, I felt an interior locution to rescue a 135lb. statue of Our Lady from imminent destruction in an abandoned driveway. Upon hefting the nearly 4-foot-tall stature of Our Lady into my game room, I soon started praying the Holy Rosary every night and returned to the one true Church of Rome. In five days, I was “compelled” to delete some 51,000 impure images and short videos, from my computer. The direct intervention of Our Lady, through the grace of Our Lord, accomplished what no temporal treatment or process could. I have faithfully prayed the Holy Rosary every day for almost eight years, even when stricken with the flu, or when so sleep deprived that I fell asleep!–Doug

Note: I corrected minor errors and shortened stories but otherwise they are the words of the individuals.