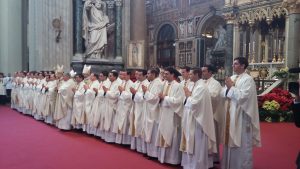 It isn’t often that I pry myself from bed at 2:45 a.m.  At that hour, I want to be sleeping, dreaming pleasant dreams of, perhaps, catching a 10-pound bass or the Blackhawks bring home the Stanley Cup (again).

I have been awake at that hour, usually because of the need to travel, or the result of having traveled through many time zones.  But today I rolled out of bed to be part of the live streaming of the ordination of 36 new Legionary priests.

Growing up Protestant, the thought of getting up in the dark, wee hours to watch a three-hour Catholic Mass would have been unthinkable.  Of course, in those days (ugh, sounding like my father), there wasn’t like streaming.  The internet didn’t yet exist.

But today, amazing technology let me join the event live, along with people from all over the world.  I watched the English transmission on YouTube, with helpful commentary by a team of Legionary Brothers.  And folks posted their comments live during the broadcast.  I saw comments from North America, Europe and as far as South Africa.

I have met most of the men being ordained today.  Some I know fairly well, have followed their time in the Legion of Christ since seminary days.  How remarkable to see mature men becoming priests who I first met when they were barely out of high school.

An ordination is a remarkable event, with solemn moments blended with tears of joy.  Parents and siblings sense both the gift and sacrifice of having a priest in the family.  Those being ordained are relieved to reach the end of so much hard work – and well aware that the often-difficult path of service lies ahead.

I had to wipe away a few tears.  And there were moments when I chuckled to myself, remembering an experience with one Legionary or another.  It was worth losing a little sleep and spending my Saturday in a cloudy state of mind.

Of course, I would object to changing future ordinations to the evening, Rome time.

One Response to When live starts early