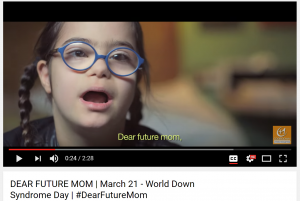 “Dear Future Mom” is among the most powerful little videos ever produced.

Fifteen young people with Down syndrome give a message of joy and hope in several languages.  The simply goal is to assure women expecting a baby with Down Syndrome that the future with that child can be beautiful, fulfilling, worth the hard work and sacrifice required.

I have watched the video over and over.  It brings a tear to my eye and (yes, it is true) makes me feel warm and fuzzy.

But apparently the impact in France is different.

The French government has banned the showing of the video on television.  The reason is so convoluted that it is difficult to explain, let alone understand – but let me try.

OK…you don’t want to show a video of happy down Down syndrome children because it would make women who aborted Down syndrome babies feel bad.

Scared of a happy child with Down syndrome?

Following this line of thought, I don’t think the French can put much of anything on television.

In short, there isn’t anything you can put on French television that won’t hurt someone’s fragile sensitivities.  But the least hurtful certainly would be an inspiring video of young people living with Down syndrome.

Occasionally, some of your visitors may see an advertisement here