Many Catholics, including me, watched the election of Donald Trump with deep reservations about the character and past actions of the man, but with a prevailing relief about the pro-life, religious freedom platform he brings and the avoidance of something much, much worse.   Late into the night on November 8th we saw something unexpected – in the year of mercy, a day after the end of the 40 days for life campaign we avoided an anti-life, anti-religious freedom regime that would have restructured the United States in fundamental and detrimental ways.

However, it’s clear the morning after that we are living in a divided and wounded country and not everyone feels the same way. 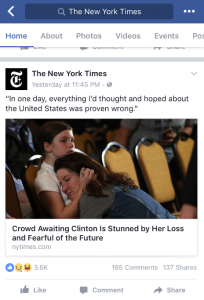 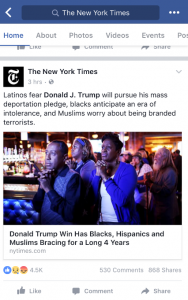 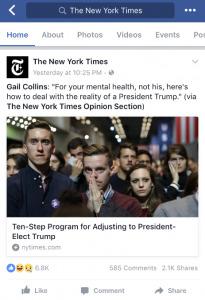 This is the time to get out into the peripheries and be a part of the Church that is the ‘field hospital’ of our world.  We have a lot of ‘walking wounded’ out there and for the first time, their fears and wounds have been exposed instead of protected.  They don’t even know where there wounds are coming from.

What are they afraid of?  The picture that has been painted for them by the media and prevailing culture, a picture of half a country who ‘do not accept them and their views.’

What are they looking for? Security and acceptance. The people who are ‘in mourning’ right now are idealistic and sincere- even if their ideals are flawed.  They sincerely believe in a perceived good, and their view point has been validated for years by the pre-vailing post-Christian culture and the media.  Think Augustine before he met Ambrose.  Their paradigm and understanding of America just took a major 180 degree turn and they’re feeling a little lost. This was not on their GPS route.  Unexpectedly, they have to consider the reality of a nation that is not monolithic in protecting the things they believe in and won’t fortress them in their ‘safe-zone’.

Like Ambrose, we reach out and accompany people to truth.  Augustine knew Ambrose as friend before he knew him as teacher. Reach out to see people who disagree with your values, look beyond the superficial, and it’s remarkable what you will find.  Fr Michael Mitchell LC, in his new book “I saw His Face: Powerful Moments of Christ’s Mercy,” relates the story of meeting a man with festering wounds in a clinic in Haiti:

“I experienced the beauty of Christ in a deep way at a clinic in Port-au-Prince, Haiti… After a few brief instructions about to how to dress the wounds properly, each of us was given medical gloves and a kit containing the antibiotic creams, gauzes, and dressings we would need. I led the missionaries in a quick prayer and turned to the line of patients.” “I must admit I almost got sick when I saw my first patient.

On the sick man’s leg, there was no skin from the shin down—only rotted flesh. As a priest, I am a doctor of souls rather than the body. I wasn’t sure how to help him, but I tried my best. I slowly unwound the bandages, which were stuck to his wounds and caused him pain as they were peeled back. Once the bandages were off, I proceeded to clean out the wound with cotton swabs and the solutions provided by the sisters.

After fifteen minutes spent cleaning the wound, I looked up at the man and gave him a smile—and that was when I saw him. The eyes of the man looking straight at me smiled back at me. I remembered the line from Scripture in which Christ says: “Truly I tell you, just as you did it to one of the least of these who are members of my family, you did it to me” (Matthew 25:40).”

As difficult as dressing that wound was, I did not want it to end. I slowly applied the ointments and took my time binding the leg in gauze and bandages. As I finished up and took off the gloves, I stretched out my hand toward the man and traced the sign of the cross on his forehead. I looked into his eyes and knowing I was seeing Christ, I simply said, “Merci. Thank you.”

Do we see hidden wounds the same way?  Do we see the scars of a relativistic, egotistical, post-Christian, fatherless culture that people bear, and recoil at the smell?  Turn away from the gaping injuries?  Or do we tenaciously seek the good in the person and refuse to see them as anything less than they truly are, treating them as Christ wants us to?

This is the time.  The wounds are open, the securities are shattered.  This is exactly the time that Christ wants to walk into people’s lives and show them that they are loved, that the deeper truths of who they are are eternal, don’t shift with the presidential election and are a basis to build a life on.  And he needs us to be willing to go there and see them and their wounds without flinching, like Fr Michael relates, like Ambrose, like Pope Francis.

Christ enters lives through the doors wounds create.  And there are a lot of open doors out there right now.

We have to remember the cause of our joy this week is Christ. And our gratitude for the results of this election should be oriented to the fact that we can live our faith freely, which means reaching out with Christ’s love to the wounded and lost – the very people who feel ‘shattered and afraid’ right now.

Fr. Henri Nouwen, reflecting on the parable of the prodigal son, notes our responsibility to be like the Father this way:

“I have to dare to carry the responsibility of a spiritually adult person and dare to trust that the real joy and real fulfillment can only come from welcoming home those who have been hurt and wounded on their life’s journey, and loving them with a love that neither asks nor expects anything in return.”

(The Return of the Prodigal Son: A Story of Homecoming” by Henri Nouwen)

Christ breaks the chains of fear, the chains that are so exposed at the moment, and brings people to freedom.  We need to be his welcoming hands, feet and heart in this time.

That is one of the most important opportunities this election gives us.  People are afraid of the Christians who have fought hard to protect the values we believe in, and we need to continue to fight for what is important to us.  The fight against the culture of death has been demonized by the media as a fight against them.  They need to see the truth, to ‘know we are Christians by our love,’ to know their true dignity and freedom as the beloved son of the Gospel parable. That victory that will be more important than any election.