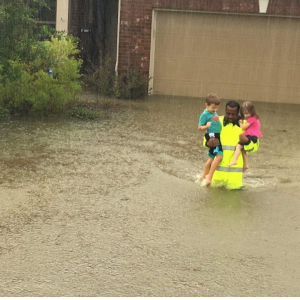 Amidst the loss and suffering caused by Hurricane Harvey and the floods here in Houston, I have been repeatedly amazed and edified to see how this crisis situation has been able to bring the best out of people.

Countless firemen, police officers, and emergency rescue members have been working around the clock to evacuate people stuck in rising waters.

But it hasn’t been enough.

Yesterday the Houston Police began putting out calls on Twitter asking anyone with a boat or high trucks to help rescue people who are trapped in their homes. Already they had been.

Churches and schools have opened their doors to be refuge centers for evacuees. Efforts cross-religion have come together to provide food and basic supplies to those who have been rescued.

One St. Anthony’s Parish in the Woodlands opened from 12-3pm to receive basic food supplies for evacuees from local families safely able to travel the roads there. Before 3pm, they had to send out a notice that they no longer had space to receive more donations. That’s how great the response was.

Even people who have not left their homes have been active in encouraging one another and reaching out to those in need. This is evident through social media and the many personal texts the members of our community have received from people asking how we are and if we need anything. In some of the group chats I am in, people are offering their homes to anyone in need of shelter. 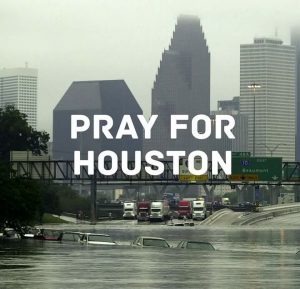 Requests for “pray for Houston” can be seen even on secular media.

We are being united in something greater than ourselves, and in the mist of crisis, individuals have arisen to be the hero they can be in their situation.

“For We Do Not Have a High Priest who is Unable to Empathize with Us” (Hebrews 4:15)

The Catechism says that Jesus became one like us in all things but sin. In his mercy and humility, he comes to share our life and sufferings, even in the midst of Hurricane Harvey.

Not just in a spiritual way.

Today the pastor of St. Ignatius Parish, a large parish community 15 minutes from my community’s home where my final vows mass was last September, finally was able to approach his church building and campus for the first time since the storm began. 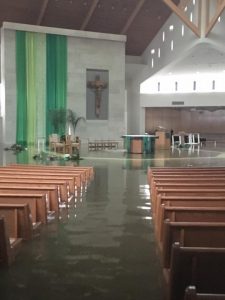 A parishioner picked him up in a boat to bring him there. From inside, he recorded a video, showing what he found when he entered. The church was completely flooded.

The pews were almost entirely under water. The water covers not only the main church, but goes up the flight of stairs to the main sanctuary. The grand piano and choir area are submersed. Water is everywhere.

Jesus’ house was flooded too.

Amidst continued emergency evacuations of families from our area because of the flooding of creek banks and water reserves, our Eucharistic Lord was not exempt from needing to be “rescued” from the flood.

Watching Fr. Norbert’s video, I realized the tenderness and compassion of Christ’s Heart. He makes Himself poor and vulnerable to share in our sufferings and each and every moment of our lives with us.

“For we do not have a high priest who is unable to empathize with us” (Hebrews 4:15).

Please join me in praying for the St. Ignatius Catholic Community and all those displaced by the hurricane and flooding.

One Response to Rachel Peach reports from Houston