Posted on September 1, 2017 by Kerrie Rivard 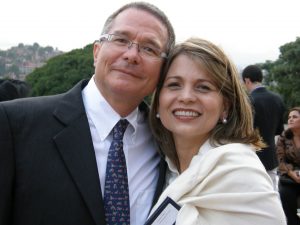 A few days ago Kerrie Rivard sent me a note, showing the concern many of you share about the situation of Regnum Christi members in Venezuela during this period of civil and political unrest we are living in.

As I told Kerrie before, and now all of you, dear friends, I thank you in the name of all RC members of Venezuela for your concern. As the big family we all are, it really moves our hearts when we receive a word of consolation and spiritual support amidst the darkness we are living in our country.

Since it is a very complex issue I will try to summarize the mayor events. As you may or may not know, in 1999 Hugo Chavez was elected president of Venezuela (a country of 30 millions) in democratic and impeccable elections, for a period of five years which turned into, through a series of ill-intended actions and changes to take over the different democratic institutions, 18 years of corruption, misery and destruction. Throughout all this time we have lived in the midst of unexpected and impulsive decisions that have led into events that still today threaten all the certainties a citizen of any country in the world should have without fear.  Simple actions such as walking in the streets of Caracas have become a risk because the city is now the most violent and dangerous in the world.

We have watched first-handed how the amassed corruption has destroyed the institutional democratic system, once established to protect us; heinous crimes against the basic human rights; political persecution, even against their own people, that in many cases has turned into an 1800s witch-hunt resulting in tortures, illegal imprisonment and murder; the economic turmoil has affected the basic human needs, food and medicine shortages have left us in a stage of urgent need of humanitarian aid. 80% of the population cannot eat three meals a day and in certain low income areas children go to bed with no meal for the day. In this environment, many illnesses that were part of last century’s struggles have emerged again, leading the country into reverse.

As of today it is public news that the government has been involved in corruption, drug and weapon’s trafficking, wasting the biggest oil resource income in Venezuelan history, violence and enduring destruction. We have a permanent presence of over 30,000 illegal Cubans involved in all levels of our institutions and in the decision-making process of our country. Their mismanagement has placed our natural resources in the hands of Russians, Chinese, and Syrians among others, including terrorists groups from many parts of the world. The “problem of Venezuela” is not only ours, but also the entire region’s, as the ill will of these corrupt men and women are creating a haven for the criminal world.

After four months of rebellion by the united opposition movement, in the streets of every city in the country, with the result of 130 people dead, mostly young students, more than 15,000 wounded, around 5,000 arrested and 655 political prisoners, the regime held fraudulent elections and gave power to 500 men and women in the “Asamblea Constituyente” to propose political, economic and social decisions which will affect our present and future even more.

During all these years around 2 million people have left Venezuela looking for other opportunities in civilized countries. Our history and our heritage shows that we have always received many immigrants, but we were not used to being immigrants ourselves. Now, families, professionals, and young people look for a better life outside of our borders.

For our Regnum Christi localities it has been a period filled with difficult situations. Our activities have been affected and the attendance in our weekly encounters is very low. Many members have left the country or travel overseas very often, others are afraid of leaving their homes.  These situations gravely affect the work and enthusiasm of the legionaries and consecrated women. But as dark as it may get, we, the members of Regnum Christi have the best opportunity in the world to thank God for letting us grow in the Catholic Church and calling us to this Movement, this charism, this family. We constantly receive profound support from our legionaries and consecrated women, as well as beautiful examples of work and commitment from them. We share emotional and spiritual support in our spiritual family. God continues to form our souls, and strengthen our hearts in the faith, the hope and the charity needed for these times. We firmly believe that God and our Mother “Virgen de Coromoto” are working very hard in our liberation and it will soon arrive.

Since the arrival of Chavez and the Cubans, we have also received the pagan waves of the “Santeria”, the religious sects that practice witchcraft in the Caribbean. These activities have become very popular among the poor and not so poor people. Our bishops have spoken very clearly about the spiritual battle we are fighting, and how our prayers and sacramental life are the most important weapons in this battle. As number 18 of our draft statutes describe, “the spiritual battle is above all inside and is fought with prayer. It is a battle fought with persistence and trust in our lord, who will deliver us from evil and helps us in our weaknesses.” This is the day to day work of the RC members in Venezuela.

I have been asked to explain the reality of RC and its members here with a practical and spiritual perspective and how RC members in North America can help. The biggest and most perfect help you can give us, is your prayers, the prayers of our spiritual family which are invaluable to us and will give us more strength in the coming months. It is said that “it’s always darkest just before the dawn”, and your spiritual support will help us reach the light we have being praying for.

United in the Eucharist,