Being a priest is fun! 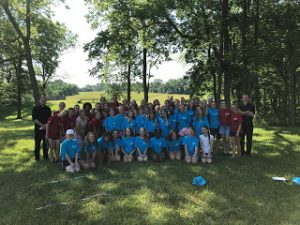 What I’ve been up to – Camp Tekakwitha Girls Camp!

The other day I was celebrating mass at a local parish while outside it rained and thundered. The storm grew steadily in volume until at the consecration, as I held up the host, lightning struck the church and the power went out. We were plunged into complete darkness. Complete, that is, except for the altar, where the candles still glowed undimmed.

There were several gasps from the congregation, and it took my breath away.

After mass, the confession line was extra-long. An hour and a half later, I stood up, hoping confessions were over and I could slip out the back door. Then someone walked in.

“Bless me, Father, for I have sinned, it has been… ten years since my last confession.”

Boy was I glad I had stayed!

After that, In walked a little girl.

“How long has it been since your last confession?” I asked.

“This is my first confession,” she said, “and that was the most exciting mass I’ve ever been to!”

“Expect the unexpected,” would be good advice to anyone thinking about becoming a priest! 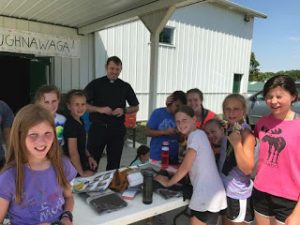 Leatherworking at Camp Tekakwitha – making mystery bracelets with the girls

Another time recently I was running errands and decided to stop inside a parish to go to confession. (priests go to confession too!) The line was huge, wrapping halfway up the side of the church. And there was only one priest hearing confessions.

Noon Mass was due to start when a man came to the lectern. “I’m sorry folks,” he said, “but the other priest hasn’t shown up for mass. I’m going to ask the priest hearing confessions if he wants to do the mass or if we should just have a communion service.”

I had been doing yard work and was wearing shorts and a t-shirt. And I figured all those people needed to go to confession. So I went up to the front and offered to celebrate the mass. The man was overjoyed.

It wasn’t till the gospel that I realized I had only put 20 minutes on the parking meter by my car out front.

So I began my homily with an SOS. Sure enough, some kind soul slipped out and took care of it, because when I finished mass and went to confession and walked out, there were still 20 minutes left on the meter.

Being a priest doesn’t make you any better, or worthier, or holier than anyone else. But it is a great gift, and it certainly is fun!

I just finished the first summer camp I’m helping at this summer, Camp Tekakwitha. It was fun, and then some!

Praying you have a blessed summer!