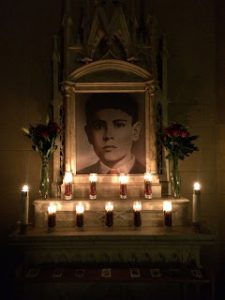 Ever wonder how a saint becomes the “patron saint” of something?

I’m not sure about all those saints – though I have my ideas – but I do know about one. In my opinion, he’s the patron saint of opening churches. His name is Saint José Sánchez del Río.

You see, I’m chaplain at a catholic school here in 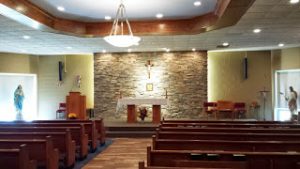 Cincinnati. One day almost two years ago, the building inspectors showed up and told us that our chapel wasn’t up to code. They lowered the maximum occupancy of our school chapel from 200+ to 60.

Which meant we couldn’t have all-school masses there anymore.

For starters, we’d have to add another exit door. Not only that, but the inspectors informed us we would have to rip down the whole wall behind the altar and replace it with fire-resistant materials. Which would cost us about $33,000 – money we just had sitting around. Right!

Like the people of Israel, we were forced to worship in the desert – in this case, the school auditorium. Ok, well, it wasn’t quite so bad as a desert. But I missed our chapel! As you can see, it’s a beautiful, prayerful place. 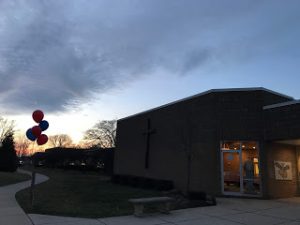 outside with new chapel exit door on bottom right by Mary

Fast forward two years. We lost our chapel so long ago, that “mass in the auditorium” had become the new normal.

Then one of the moms at school rallied behind the project. She worked with the city to figure out a way to make the chapel up to code without spending $33,000. She found someone who put in the second exit door on our shoe string budget, and another man who had some extra concrete to pour a ramp up to the door.

So the other day when she told me the inspectors were coming, I hunkered down to pray. And glory be, they moved our occupancy back up to over 200.

First Mass back in our Chapel, yours truly loading on the incense

That was at about 10:30am. All school mass is at 2pm on Fridays. So we scrambled to set everything up, and it was beyond-joyful for us to celebrate mass there again. I, for one, felt very much like dancing down the aisle.

And smack dab in the middle of the mass, it struck me: Saint José had worked this miracle. How did I know? 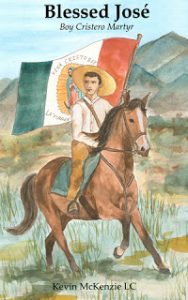 Book I wrote about Saint Jose

Saint José, the little Mexican martyr I wrote a book (“Blessed José”) about, is one of the patrons of our school. Not only that, but February 10th is his feastday, and our first mass back in our chapel was the first all-school mass after celebrating his feast day as a saint. And there’s more. In the back of the chapel, we have a small side altar. Before, it was dedicated to Saint Miguel Pro – an awesome saint. But as soon as José became a saint, we felt the altar should be dedicated to him – a young saint for a school full of young saints-in-the-making. So two of the faculty swapped out Saint Miguel’s image for Saint José’s. That was early February.

What really struck me was this: if little Saint José is patron of something, what is it? Opening up churches, of course! That’s what he gave his life for – to reopen the churches of Mexico. And he had reopened our church! Wow!

So pray to Saint Anthony when you lose something – and he’ll help you find it. Pray to Saint Jude when you feel like a lost cause, and he’ll come through. Pray to Saint Christopher when you’re on a big trip, and he’ll keep you safe. But when your church is closed, be it due to country-wide persecution, or even just fire code, pray to the little fourteen-year-old Mexican boy, José. He’s just getting started.