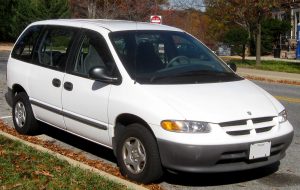 Eric works at the Dodge dealership, and I met him when one of our mini-vans had a part recall back in January. He works at the counter, so deals with customers coming in and out. He seemed to be in his early-mid twenties.

The parts ended up taking longer than normal to replace; he was helpful in the communication back and forth, very apologetic that they had underestimated the time it would take.

When finally it was ready for pick up, and he took me back behind to the other counter, and getting the maintenance logs back from the office, quizzically asked if “Pastoral Support Services” was some type of church.

Not knowing what context or background he was coming from, I told him we were consecrated women, like full time Catholic missionaries dedicated to evangelization. He got excited, saying he had always wanted to do some type of mission trip to help others, but had never gotten around on it.

I could tell that somehow the whole “missionary” thing had reawakened something inside of him. Walking me out to the curb for the van to be pulled around, he suddenly started to share these existential thoughts on life and his perspective on things.

He started talking about how he thinks that despite what others might say, he considered every moment of life valuable: the good, the hard, the crazy. Everything happens for a reason; everything is part of a greater purpose.

“I don’t know if I would say that ‘God’ is that reason or purpose, but you can always learn from what happens in your life. That’s, of course, if you choose to.”

We were only there a few minutes, but from what he shared in that short bit, I could see he was searching to find meaning in his life; I could tell he had seen a lot from others’ lives and was going through the process of defining who he wanted to be and what type of life he wanted to live.

Keep going, Eric…you are on a journey! Keep thinking, keep learning from your experiences…keep looking for what gives your life meaning.