The Imprint of the Past 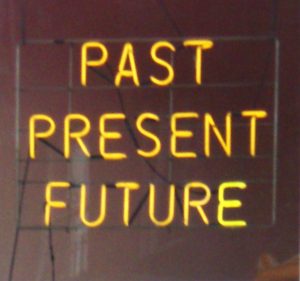 Each person is a book of life. We carry so much more within us than we wear on the surface. There is a history behind each person, a past so personal, because each person is unique and unrepeatable. While at the seminary in Connecticut, I used to enjoy our occasional trips into Manhattan to visit museums like the Metropolitan Art Museum, the Frick Collection and the MoMa. As we drove through the bustling, dirty streets, I would fix my gaze on random passersby. I’d look at their face and wonder what this person bears inside. The rich, the poor, everyone from everywhere. Sadly, the great majority of their gazes looked rather aimless and empty. What history was behind this person, this world unknown and unknowable to me, yet a world that was everything to him? What hopes and wounds does he bear inside? I will never know.

We all bear our history within us. St Augustine in his City of God (Bk 12, ch 16) and in his Confessions (Bk 11, ch 11-14) mulls over this question of time. Does the past still exist? If it doesn’t, it can’t affect me, but what about those obvious joys and wounds that the past still bears on me? Fido doesn’t have father wounds, but every man and woman bears within something from the past. For Augustine, the past is present as memory. Pope Francis speaks a lot about memory. If we aren’t able to remember, we become immature children who have arms always outstretched with bottomless palms. We receive as if everything was owed us and are never grateful.

Our memory is so important for recalling the grace received because if we chase away that enthusiasm which comes from the memory of that first love, this enthusiasm coming from that first love, then a huge danger arrives for Christians: a lukewarm (faith). Lukewarm Christians. They’re there, immobile and yes, they’re Christians, but they’ve lost the memory of that first love.  And they’ve also lost their enthusiasm. In addition, they’ve lost their patience, to tolerate life’s problems with the spirit of Jesus’ love, to tolerate, and to bear on their shoulders the difficulties… Lukewarm Christians, poor things, they’re in grave danger. (Pope Francis, Homily Jan 30, 2015)

We can’t fully live if we don’t live with memory. For one, we would be blind to the many graces we have gratuitously received from the loving heart of the Father. Pope Francis calls this spiritual amnesia. On the other hand, we would never be able to address the wounds of the past that are really present and affect us now. We would constantly be addressing the symptoms of the sickness rather than go to the root because the root is in the past. So without living the past in the true sense, without living with a grateful and understanding memory, we can’t live the here and now to the full as children who have been wounded by sin, yet so loved by God.

The past is not something of no consequence. We didn’t just fall out of the sky full-grown. We weren’t born yesterday, nor was the world. We are the heirs of a personal and cultural history that we bear deeper within us than we may see at first. We all carry the gifts and wounds of the past, and we need to learn to recognize and embrace them to live the present to the full. Viktor Frankl, in his book Man’s Search for Meaning, said that we shouldn’t look nostalgically to the past as youthful years that will never come back. Rather, he says our past is the most real part of our history. The future contains possibilities, but the past contains facts, indelible facts that have made us who we are today. He says our personal history is more valuable that the future because it is more real.

Knowing how to embrace the past and help others to do so is something that is going to be much more important in the future for the New Evangelization. Unfortunately, it seems that over-dependence on technology and the decline of family morals is ever intensifying. There have always been father wounds, but I think we need to be prepared in the generations to come for a quantity and intensity unseen until now. I don’t mean this in a doomsday tone. I mean we need to be ready. There’s no use adopting a false optimism. If it’s already raining, bring an umbrella. With the levels of broken families, the rate of abuse towards minors, the degradation of the dignity, uniqueness and distinctness of our sexuality, to name a few, we will have to deal with the consequences. Trauma, disillusionment, obsessiveness, despair, and confusion about the truth of man are only natural when childhood is deprived of love, protection and the truth.

I read a curious passage from Romano Guardini’s book on the stages of life where he speaks of how a child can play with anything. The more primitive the object is, the more impressive the child’s imagination to create some living, breathing companion to share in his adventures. Often more sophisticated toys and computer games don’t demand such imagination from the child. They don’t stimulate him, so he isn’t flexing that imaginative muscle as much. Guardini’s point here and in the entire work is that no stage of life (infancy, adolescence, young adulthood, mature adulthood, and old age) is merely a preparation for the next stage, nor is any stage in life the mere result of the previous. Each stage in life has its own value. In other words, we are not just working up to our prime, living our prime, or degrading from our prime… But if today kids aren’t being kids, if they aren’t developing their imaginations, but are just depending on the constant stimulation of electronics… What is all this going to look like in the near future? I’m not in a place to say what is good and bad about technological developments. It’s a mixed package. I’m just saying there are natural results, and we need to be ready.

Again, I make these reflections not as a prophet of doom. I want to help everyone find their fullness and joy. I just realize that anyone who wants to do this is going to have to come to terms with the facts. We bear the past within us, and we can’t achieve our fullness by denying it. But our environment is in many ways becoming progressively antithetical to our flourishing. People are bearing more wounds from the past.

I read a telling example of learning how to integrate the past in Viktor Frankl’s book, Man’s Search for Meaning. He relates the following story:

Once, an elderly general practitioner consulted me because of his severe depression. He could not overcome the loss of his wife who had died two years before and whom he had loved above all else. Now, how could I help him? What should I tell him? Well, I refrained from telling him anything but instead confronted him with the question, “What would have happened, Doctor, if you had died first, and your wife would have had to survive you?” “Oh,” he said, “for her this would have been terrible; how she would have suffered!” Whereupon I replied, “You see, Doctor, such a suffering has been spared her, and it was you who have spared her this suffering—to be sure, at the price that now you have to survive and mourn her.” He said no word but shook my hand and calmly left my office. In some way, suffering ceases to be suffering at the moment it finds a meaning, such as the meaning of a sacrifice.

If we are able to see the past for what it is, we can embrace it. Yes, this goes for the wounds, but also for the gifts. Everyone has been so blessed beyond compare by our loving Lord. We need to recognize both gifts and wounds. A doctor needs a proper diagnosis to help the patient thrive. Only in this way can we then move forward towards the fullness of life to which they have been called.

2 Responses to The Imprint of the Past