Humungous Mother of all 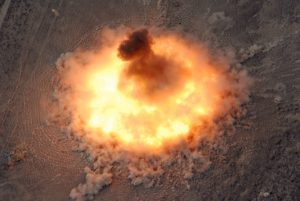 Pope Francis got lots of media attention (a common event) this week when he expressed shame at the American reference to dropping the “mother of all bombs” on some nasty people in Afghanistan.

The bomb’s official name is GBU-43 Massive Ordinance Air Blast (MOAB). I suppose MOAB could be an acronym for “mother of all bombs.”

In any event, I agree with the Pope that the mixing of bombs and motherhood I a bit distressing.  Motherhood ought to involve cuddly babies, pot roast in the oven and mini-vans going to soccer matches.  No bombs allowed.

This motherly controversy inspired me to do some research and I discovered that the term “mother of all” is, well, the mother of all phrases.  That is, it turns up often.

There is evidence is has Arabic origins, with Saddam Hussein having called the Gulf War the “mother of all battles.”  For Saddam, it turn out to be the “mommy dearest” of all battled.

The mother of all modified has been widely applied:

You get the idea.  Something really big and special becomes “mother of whatever.”  It could be something good or something bad – mother of all chocolate bars or mother of all mosquitos.  Frankly, mother really doesn’t make sense in any of these examples.

Therefore, I propose an alternative to mother of all:  honking humungous.  It works really well with a range of topics:

I think it works.  And even though I set out to write the mother of all blogs, I’m happy to settle for one that is just honking humungous.