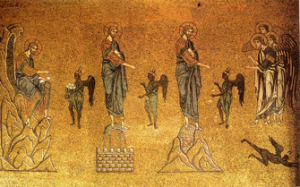 Lent can be similar to going to war. As Christ shows us, He goes to the desert to fight temptation. We have three enemies: The devil, the world and our flesh. These enemies usually attack in three ways, as they did for Christ: Sensuality (the temptation of the bread), vanity (the temptation of throwing himself down from the temple), and pride (the temptation of having power over all the lands). The weapons we have to fight are prayer, sacrifice and charity. We need to polish up our weapons during Lent so that we can grow and destroy the enemy. It is most important during this time of Lent to learn to turn to Christ as the one who fights for us and defends us from the enemies. He has fought, we have to hold on to Him more firmly to be sure of victory.

Fr Andrew Gronotte, born and raised in northern Kentucky entered the Legionary apostolic school in eighth grade in 1998, where he began his formation for the priesthood in the Legion. Currently he is finishing his theological studies in Rome, where he will be ordained in a little more than a year.
View all posts by Fr Andrew Gronotte LC →
This entry was posted in RC Live. Bookmark the permalink.