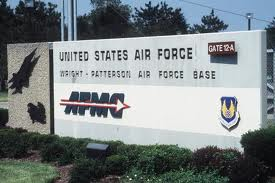 “For surely the confidence of a notorious sinner honors God most of all, for he is so convinced of God’s infinite mercy that all his sins seem no more than an atom in its presence.”  (St. Claude de la Colombiere)

Wright Patterson Air Force Base.   Having served in the Army Air Corps in WWII, my dad was so excited to accompany me on this weekend trip with the Cub Scouts.  As our school bus passed the sign above, our Scout Master pointed to a fallen B-52 bomber off to the right and said, “Gentlemen, if any of you tries to check out that plane, there will be severe consequences.  Don’t even think about it.”  My friends and I smiled at each other, and within 6 hours we were climbing through the greasy cock-pit and checking out the controls and empty bomb shells…cool stuff!  Our Scout Master wondered why it had taken so long for us to collect “firewood” and within a few minutes he had us marching single file line, hands in the air, back to camp.  I marched past my dad, and although I sensed a little disappointment, I also sensed a lot of love and understanding.  My sin seemed “no more than an atom in his presence.”