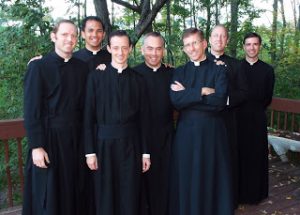 Sometimes the greatest treasures are hidden in plain sight. 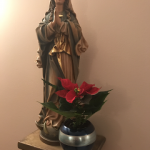 Take Brother Thomas. A few days ago I had bought a mini poinsettia for the statue of Mary in our chapel. After a few days, it started to wilt. Now I love plants, but they’re often mysterious to me. I water them and they die. I don’t water them and… they die! Then yesterday as I was cooking breakfast out of the corner of my eye I saw brother Thomas carrying the little poinsettia around. He did something by the sink with it, then set it out in the hallway for a little, then a few hours later, there was the poinsettia back by the Blessed Mother, just like new. Now, maybe he made some little side trip to the florist, but I think he actually has some kind of special power over plants. You’d never have thought! 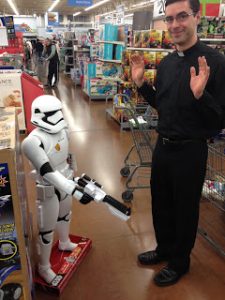 Or Father Louis. We all take turns cooking – and sometimes things turn out better, sometimes worse. I was in a rush the other, so my plan for lunch was to scarf down a sandwich and jump in the car. But as I entered the kitchen, tempting aromas drifted from the pots and pans Father Louis had bubbling on the stovetop. It made me pause. But I still made my sandwich and, after we had prayed, started gulping it down. “Would you like some?” Father Louis asked. He had put together an alfredo shrimp pasta with zucchini and mushrooms and other delicious mystery ingredients inside. I took a little dab on my plate. And then some more. And then some more. Pretty soon I had given up hope of speeding away, and was neck-deep in a plateful of his pasta masterpiece. I canceled my appointment and spent lunch enjoying his good food and the conversation with my brothers. 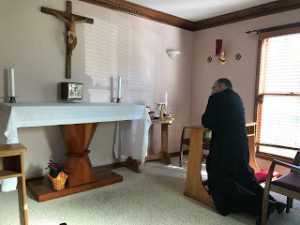 Or there’s Brother Vinh. I’m running out of hair, but while I still have some, I’m the kind of guy who goes to Great Clips and gets the $10 haircut. Usually I look like a hedgehog for about two weeks afterwards, and then things even out. But Brother Vinh cuts hair. So I asked him the other day to cut mine. He agreed, sat me down, and then went to work. Afterwards I was shocked: gone was the usual itchy-icky-I’d-better-take-a-shower feel! I’m no judge of haircuts, but I got plenty of compliments and definitely skipped the hedgehog stage this time. Brother Vinh’s haircut made me feel good. 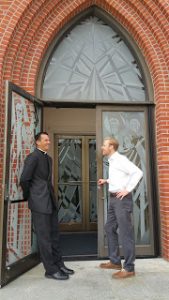 You see, these men I live with don’t just do work. They pour their hearts into what they do. I’ll never forget the time I asked my mom what her secret was to her always making utterly scrumptious and delicious food. She simply replied: “As I cook, I love everyone who I’m cooking for.” And that’s it! That’s the secret! That’s what makes her food different, as well as Father Louis’, that’s what makes Brother Vinh’s haircuts so different, that’s what makes Brother Thomas caring touch so amazing. Love. I consider myself blessed to have a mother who is so steeped in it, and to have brothers who incarnate it.