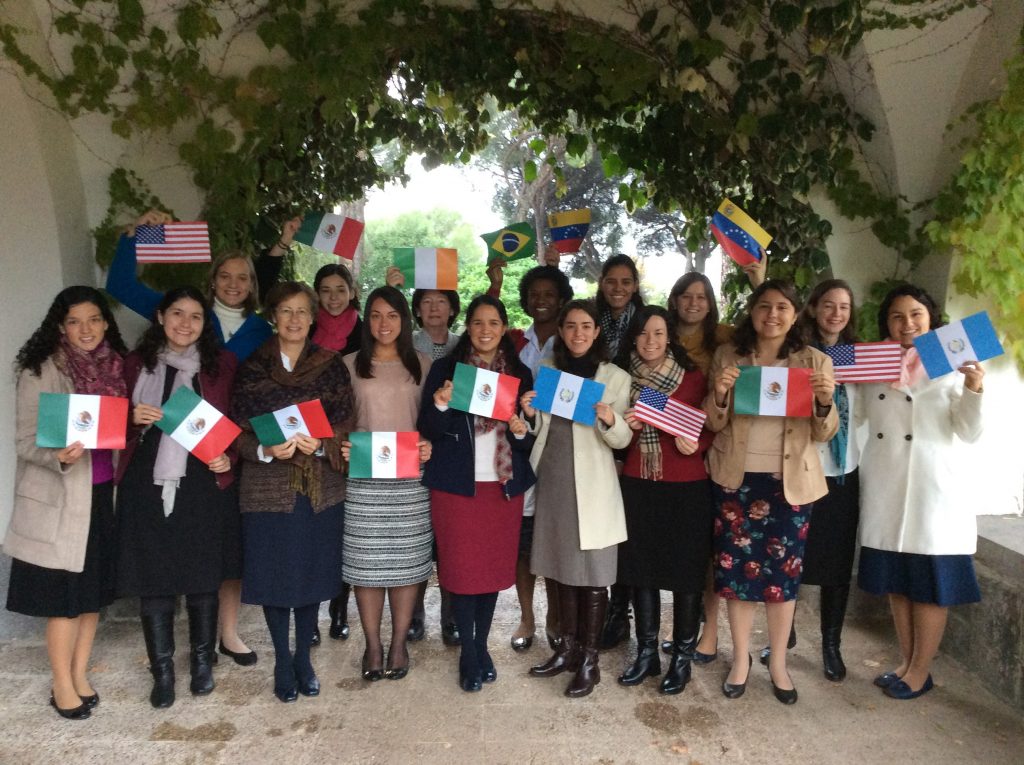 We finally took our family picture. So although the year is well underway, I´d like to introduce my community: also known as the Consecrated Women in the studies stage of formation. Including our three formators, we are a big happy family of sixteen, with six nationalities.

First comes first: The first years just got consecrated this past summer… they just celebrated their three-month anniversary. Congratulations! Two are from Guatemala and two from Mexico. (Fun fact: they hold the claim to fame of being the first two Consecrated Women from Guatemala!)

There are four second years, who arrived to Madrid from Monterrey after their consecration last summer. One is from Venezuela and three from Mexico.

As for us third years, three of us are American, one Venezuelan, and one Mexican. We are actually in our second year of studies, but we are preparing for our renewal of temporal vows this summer. Two did their candidacy in Monterrey and three of us in Greenville, and then we all spent one year in Greenville together before coming here to Madrid. That puts us in our “third year” of consecration… and we will be leaving for two years of apostolic practices in our new communities after this school year. So start making bids! J

The past few months I have often commented on how the beginning of this year have not had any comparison to this time last year. Being able to communicate my thoughts fluidly and follow a conversation without exhaustion, knowing the ins and outs of San Dámaso, being settled in to our house, the majority of the community having at least a year behind us… has all contributed to a general atmosphere of feeling settled (instead of surviving!). Of course, there is a significant transition at the beginning of every year, since every year we have a new community. But even the reality of having a community that already exists into which to welcome the new ones has been a beautiful gift for all of us.

Another big difference this year is that it´s the first year that all of us had two years of candidacy according to the new formation plan. It´s been beautiful to see how that has given us a shared experience of discernment, although taking place in different countries, at different times, and in different ways for each person. We share a similar basis of theoretical and practical experiences in themes such as our vows, fraternal life in community, prayer, and our charism, to name a few. Although each person´s path of discernment is very unique, I can perceive a similar flavor from each of our paths having included two years of focused discernment in the candidacy community.

The ups, downs, differences, similarities, transitions, shared experiences, internationality, and growing is all part of this miraculous gift of God that we call community. The Church´s document Fraternal Life in Community sums it up well: “To live in community is to live the will of God together.” As our little family continues striving to do just that, please pray for us and know we pray for you!