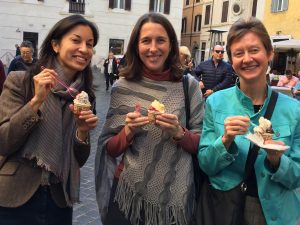 One of the benefits of visiting Rome is sharing gelato with inspiring Consecrated Women of Regnum Christi, including from the left: Melicia Antonio, Mary Patt Pirie and Melissa Kuhn.

I’m grateful to be in Rome this week.  It isn’t that I like being away from home (and especially away from my wife), but if I have to go on a business trip, this is the ideal week.

In fact, there are three key reasons why it is the perfect week for this guy to be gone from his home in Chicago.

First, Rome is a beautiful place to visit, especially for someone trying to live the Catholic faith.  The historic sights are magnificent, the food is great and the people are friendly.

If they win this year, the celebrating will go one for days and it will be impossible to avoid dancing, singing, brew-guzzling fans making fools of themselves.  When a team has been a loser for so long, you can’t depend on classy behavior in victory.

If they lose this year, the crying and whining will go on for days.  It will be like the end of the world, but Cubs fans will just say, “wait until next year.”  And they’ll cry in the beer – a lot.

So by leaving the country, I’ll avoid most of the excessive emotionalism.

Third, this is the last week before the Presidential election.  And I’m over-saturated with attack commercials, lying politicians, biased news reports, angry people, and debates about everything except the issues that might make my life better or worse.

I’ve already decided which of the least-bad decisions I’ll make in the voting booth on November 8.  I really can’t imagine that either candidate could do anything to change my mind at this point.  What more could they possibly do?  (OK, that might be a foolish question.)

But at least if I spend a week away from it all the choice won’t get even more miserable.  Please make things right before I get home.