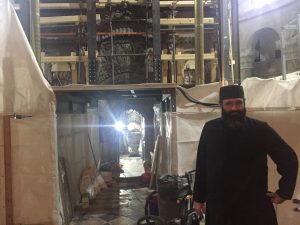 Breaking news: A few days ago, after at least eight centuries of being hidden under marble slabs, National Geographic reported that Christ’s original tomb surface was partially uncovered during the urgent restoration of the small Chapel (Edicule) surrounding it inside the Holy Sepulcher Basilica.

Cutting edge technologies were applied by leading archeological restoration scientists of the National Technical University of Greece. Their complete finds will be studied and published.

A certain skepsis can form over time when the original burial place (Jews customarily bury their dead on bare rock shelves hewn into hillsides) was lying under layers of marble for centuries that no one had dared to remove.

On October 28, media around the world were abuzz after National Geographic published the exclusive story of the exposure of the bedrock at Jesus’ tomb in Jerusalem. I had missed the story due to meetings and intense backlog of correspondence.

The BBC called during a special lunch and I excused myself to take the call. They said they want an interview on the newly announced discoveries. But how can you do a BBC interview without firsthand knowledge of the facts? So a very good friend at the office of the Greek Orthodox Patriarchate within minutes arranged a late evening appointment to visit the opened up Tomb with the very director of the scientific team leading this discovery: Professor Antonia Moropoulou, Vice Rector of Academic Affairs of the National Technical University of Athens and Chief Scientific Supervisor of the project for the Rehabilitation of Holy Sepulcher.

“Welcome back, Fr Ferghus!”– it was years since we had seen each other and this County Cavan native was freshly back at the Holy Sepulcher after many years serving at Mount Nebo in Jordan where Moses looked into the Promised Land at the end of his life. At Mt Nebo, Fr Ferghus had witnessed, firsthand, marvelous archeological discoveries made by the Franciscans over the last few years, but that’s a story for another day.

The Greek Orthodox and Armenian Patriarchates together with the Franciscans (on behalf of the Catholic Church) jointly manage the Holy Sepulcher. So, Fr Ferghus was concerned that this present renovation task proceeds properly.

The Greek Orthodox monks, Fr Theodolus and Fr Chrysanthos, after a first brief verification of the purpose of my visit, were most welcoming and we had some great exchanges with various monks. (The Greek Orthodox Patriarchate together with the Catholic Church, represented by the Franciscans, and the Armenians share the responsibility for maintaining the Holy Sepulcher. Besides, the Coptics, Syrian Orthodox and Ethiopian Church also share ancient original rights within the complex holy site.) 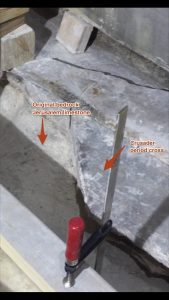 It was dusty, the floor of the tomb area was covered in debris and some tools lay around. Scaffolding planks surrounded and filled the Edicule (little chapel inside the Holy Sepulcher comprising the Angels’ Chapel and the Tomb chamber). Space was tight. A journalist took pictures. Workers were moving diligently – they had a total of 60 hours to get this archeological part completed according to the original agreement drawn up for the task. Conservators were outside injecting grouts into the joints to strengthen the fragile structure of the Edicule and a young lady was cleaning some liquid traces that were seeping inside the Angel Chapel from this process. Another student, also part of Prof. Moropoulou’s scientific team, did not have long to speak but was excited to say her efforts here are part of her doctoral dissertation. The National Technical University of Athens ranks among the world’s leading universities for archeological restoration. They had applied ultrasonic tomography, raman spectroscopy, photogrammetry, thermocameras, electromagnetic tests, chemical analysis, IRT drone, T_RH sensors, endoscope, georadar and other techniques to study & record this precious spot. Supported by their archeologist, Fredrik Hiebert, National Geographic is at hand with a drone camera filming everything from above.

As we waited in front of the tomb, Fr Giuseppe OFM related some details of the discovery. This was most helpful as the viewing opportunities would be during moments when the workers were moving to their work base for supplies or reports. Fr Giuseppe expressed the radiant joy of a believer who lives in the middle of a skeptical world and is aware that this new “Jesus sound-bite” spreading around the world will have a good effect on many folks. His precise Italian comment:  “riconfortante” (encouraging, consoling, …).  He knew this was a timely & very good gift.

Then Professor Moropoulou arrived. A most gracious person radiating serene joy and one could detect a strong sense of purpose and mission. I had to think of the women who were the first witnesses at this tomb 2000 years ago.

Finally, I was able to go inside the tomb chamber alone while Prof Moropoulou was discussing some matters in the Angel Chapel with her assistant, Harris Mouzakis, engineer and professor at the National Technical University. Actually, I was barely inside the low entrance. The last times I was there in early summer my back pain required others to help me bend down and get inside to celebrate mass for pilgrims. Now I remembered all who had helped me during my three-month-long back therapy, the doctor, his staff, my gracious hosts and a myriad of helpful people who have assisted an amazing renewal of my condition. They got my first prayers, filled with gratitude! And it was a special moment of awareness of thanks I owe the Almighty for this goodness at this very place.

The tomb was to my right. The cover marble slab that was placed over Jesus’ tomb was slid off and standing on its side. Scaffolding-like planks filled almost the entire space so I could not go in further. The Crusader-period (12th century) dark marble slab was visible with a small cross which identified its period. Parts had been removed exposing the fill underneath to a depth of maybe 3 inches, give or take. Then, right there: the bare bedrock. 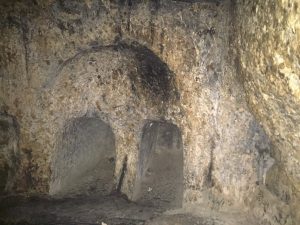 Further testing sounds will be made to verify that the bedrock continues way beneath this visible part for definitive confirmation, but all evidence points to its being original bedrock in its original position. In fact, soundings seem to indicate that there is a lot of bedrock serving as a base to the entire Edicule.

Then you realize that this bedrock is at the same level as the nearby Joseph of Arimathea burial niches. You scan the whole Rotunda floor and you realize it is below the level of this tomb bedrock. That part of the hill was completely removed for the construction of the first Basilica. So you can ask why this piece of bedrock was left standing higher at the very center of the Rotunda built around it. The answer imposes itself: this is Jesus’ original tomb.

On the left wall, across from the tomb, original rock was also exposed when workers removed the marble covering. The whole surrounding hillside between Jesus’ tomb and the nearby one known as of Joseph of Arimathea in the Syrian Chapel, was removed when the Helena Basilica was constructed in the early 4th century. But underneath the Edicule is original bedrock. We are surely inside the original tomb area.

VIDEO:  First thoughts, impressions and prayers in front of the newly discovered bedrock of Jesus’tomb

The immense privilege of seeing the bed-rock under the marble slabs last night, only hours before it would be closed up from direct contact, for who knows how long (some of the bedrock we saw had been concealed from view for at least eight centuries), inspired me to pray for you and all our deceased relatives and friends and those faced with immediate death, now. The bare rock, where Jesus’ body laid, and that I managed to touch by reaching in over the planks, points to his Resurrection that gives us immense confidence and courage. Christ is Risen. Alleluia! 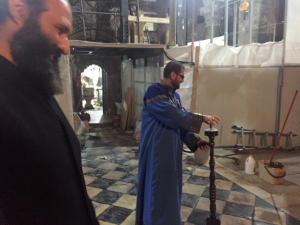 I asked Fr Eusebius, a Greek monk who has already served 50 years here in the Holy Land (compare that to my mere 10 years here), about his feelings. He took me back to the bedrock of our convictions: “I have faith. Feelings are not the issue. We always knew the sanctity of this place.” Enduring Faith. This struck me as a powerful contrast to the observation of a Californian evangelical pastor friend who two days earlier put his finger on today’s fragile reality for many people: feelings are the foundational facts. Facts don’t matter, feelings are what count!”

The walk back to Notre Dame last night, after the Holy Sepulcher door was closed, partook of some of the joy of that first Resurrection Day. Yesterday we had just celebrated the feast of the Apostles Simon and Jude and I was walking back with them to bear witness all the more to our Risen Savior and Lord! 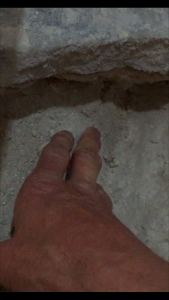 Few hands have touched this bedrock since at least eight centuries. Your beloved deceased and those faced now with approaching death were especially in my prayers at this moment.
By the way the short BBC interview went quite well with Prof Antonia Moropoulou leading the charge. Once we get the link we will update this post. Continue to keep us in your prayers. We always do the same for you here at all the Holy Places in the Holy Land!

Since I spontaneously awoke at 5 am this morning, I immediately knew I must head as fast as possible to the Tomb. I had understood that the 200 year-old marble slab would be replaced and would once again seal this remarkable space. I got there at 5.35 am (it is less than half a mile from Notre Dame and easily walked in under 10 minutes) only to discover that it had been replaced at 4 am! Work was progressing feverishly but, while you could see how tired people were, a deep satisfaction radiated from everyone. An amazing task was being completed.

Fr. Konstantinos, a former Bodyguard who is now a priest and a Greek Orthodox monk, was so kind. I was able to quickly go inside and snap the replaced stone over the tomb. We had a great chat. He recognized it as a providential blessing to have recently come to serve here in Jerusalem while history is being made and written and to look at the original place where Jesus’ body was laid. I joked that he was a bodyguard but there was no body to guard since He is Risen! He said they do that with him in Greek also!

Fr Theodoulos (means ‘Servant of God’) and Fr Ferghus showed signs of great fatigue but they also knew they had witnessed a unique window in history. They had spent many hours of the night in prayer vigils as the various Christian communities constantly take turns to pray at this key place for all of us Christians. A very joyful Armenian cleric, Deacon Ara, came by to tardily pick up a candlestick that apparently he had forgotten from their earlier liturgy as was evident from the humorous quips between him and Fr Konstantinos.

Father Eamon Kelly from County Clare, Ireland, joined the Congregation of the Legion of Christ’s Dublin Novitiate in 1974. Father Kelly directed youth ministry in the Greater Detroit area from 1979 to 1983, and developed his community’s public relations outreach in North America. Father Kelly was ordained a priest in 1987. From 1989 – 1999 he founded Legionaries of Christ communities in Germany, Austria, and Hungary. From 2000 through 2007 Father Kelly served in various ministerial positions that include leading business leader retreats and providing personal coaching in New York and serving as Chaplain at Northern Kentucky University. In 2007, the Vatican Secretary of State assigned this avid hiker, multi-linguist, personal spiritual coach, and international speaker on the Shroud of Turin and Holy Land archeology to Notre Dame of Jerusalem Center as the Vice Chargé of the Pontifical Institute.
View all posts by Fr Eamon Kelly LC →
This entry was posted in RC Live. Bookmark the permalink.