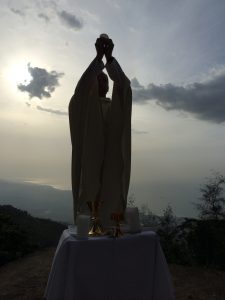 Mission Youth has formed me to better fulfill leadership roles in the Movement. Truth is, that no matter how many courses you take and how many mentors you have, there are experiences that mark you and make you into the person that you are. They move you past theory into reality. Haiti missions have been just that for me.

The first way that Haiti helped me, is that it shook me up. Haiti has a way of bringing to the surface what is inside the soul, good and bad. It turns you upside down and inside out. To be a leader it is necessary for this to happen every once in a while. It is too easy for me to acquiesce inside of my comfort zone. I can become so dependent on my qualities and gifts instead of on Christ alone. This self-reliance and self-dependence is a farce for the apostle of the Kingdom who is called to live in the disproportional desires of the Heart of Christ. The Lord often asks for more than what we are able to give so that He can supply what is missing. So, oddly as it might seem, Haiti has helped to be prepared to serve in leadership roles by helping me to accept how useless I am and yet at the same time how much the Lord is capable of doing through me. 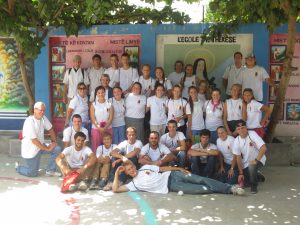 The third grace that has helped prepare me for leadership in the Movement has been real contact with the different branches of the Movement. Regnum Christi is an ecclesial movement of apostolate. Since we began the renewal, we often talk about our spiritual family and the value of each of the branches. Very few times do we have the opportunity to experience it in an intense apostolic experience. It is in experiences like Haiti that the precious jewel of the Movement shows it’s splendor. In such a natural and simple way the legionaries, consecrated and lay RC come together and complement each other so as to make reality with the grace of God the impossible miracle of the transformation of souls into apostles. Nowhere have I seen this happen like in Haiti.

The first time I went to Haiti, I had not experienced the reality of the spiritual family. After that first mission trip to Haiti, I started to try to reproduce the lived experience in the locality. When the superiors started to see it, they asked me to become local director. They did not know that everything that I had done up until that point and since then has stemmed from my deep, intimate and personal experience of the spiritual family that started in Haiti and has only grown since then. I would think that this was just a personal grace I received if I had not seen it happen over and over again with consecrated, brothers and priests in Haiti. So many have discovered the spiritual family there.

I could go on and on about how Haiti has helped me but I will simply include here one last point which summarizes all of the points before it and all those I am leaving out. This is the renewal and growth in love. Haiti stretched my heart out past itself so as to run free over the wide fields of love. To love without distinction of precedence, wealth, age, background or education. To deeply love both the missionaries and the people we serve. To take each person at face value and discover the preciousness of that soul. Over and over I have experienced in myself and in others the fight that goes on in Haiti and the fundamental growth that I can only summarize in that one word, which is so often misused and abused, love.

Authentic love is what Haiti has taught me, it is also what Haiti has renewed me in every time I have gone back since I received positions of responsibility in the Movement. It is so easy to start to become attached to positions, to complements, to responsibilities and start to feel myself the absolute judge and one in charge of projecting things with my plans and projects. How dangerous! Over and over Haiti has sanded me down and brought me back to the fundamental key of every apostle of the Kingdom, love.

These are my experiences that I openly share with you. I have no problems in stating frankly how much the Haiti missions have helped me. If I had time and space I would have to tell you about every one of the missionaries the Lord has changed there and how they became leaders themselves. That would be a book!

Fr. Aaron was born in Forest Lake, Minnesota. He entered the Legionary of Christ minor seminary in Cheshire, Connecticut in 1995. The following year, he entered the novitiate and was sent to Germany where he lived for two years. Afterwards, he studied humanities in Salamanca Spain for a year. He did youth work for five years in Chile. He received a license in Philosophy specializing in Metaphysics and a license in Theology specializing in Anthropological (Dogmatic) Theology at the Legionary of Christ’s Pontifical Athaneum Regina Apostolorum in Rome. During his studies he did youth work in Florence, Italy and helped with the foundation of the community there until August 2012. He was ordained a priest on December 24, 2010. He currently serves as head of the Everest board of directors, is Regnum Christi local director, and the Regnum Christi greater Detroit area chaplain. In February he will be moving to Rome to be the assistant communications director for the Regnum Christi Movement.
View all posts by Fr Aaron Smith LC →
This entry was posted in RC Live. Bookmark the permalink.