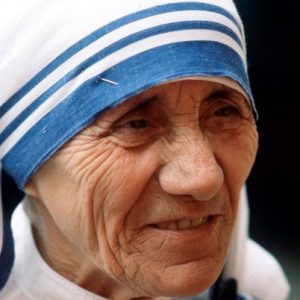 Stories of the sacrifices, holiness and determination of Mother Teresa fill the media this week.

People who were blessed to know her and work with her are recounting how she influenced their lives.  We can read the poignant and sometimes humorous stories everywhere.  She inspired millions.

I didn’t know Mother Teresa, never got to meet her, never saw her speak from a distance.  But I read much about her and enjoyed her gentle (but firm) honesty – especially when encountering the rich and powerful.

Mother Teresa didn’t pull any punches.  And she was focused like a laser beam before laser beams were part of everyday conversation.

Memorable quotes by Mother Teresa abound.  There is one that has especially impacted my thinking over the years, living as I do in a culture that idolizes winners and ridicules losers:

“God does not require that we be successful only that we be faithful.”

Those words are a perfect rebuttal to the often-cited philosophy, “he who dies with the most toys wins.”

Mother Teresa reminds me that when I take the heaven-entry exam the questions won’t be about how much money I made, status I achieved or stuff I accumulated.  The guy with the keys to the kingdom will just want to know if I was faithful to God, did I love all I could.

On Sunday, Mother Teresa (Blessed Teresa of Calcutta) will officially become Saint Teresa of Calcutta.  Oh, there will be a few grumpy articles in the news media about how she really wasn’t a nice person or once kicked the neighborhood cat, but I don’t think many people who will argue she isn’t a saint.

Still, I admit that Saint Teresa of Calcutta tends to feel a little awkward coming from my mouth.  She will always be Mother Teresa to me.

One Response to Thank you, Mother Teresa