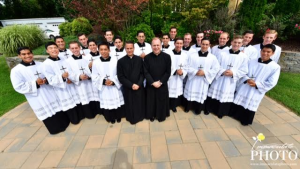 “By your profession of vows today, you are telling the world that Jesus is real.” – Fr. John Connor

On Saturday, 22 brothers professed vows (one missed the photo!): 16 of them for the first time, 5 renewed, and Br. Adrian Lawrence (San Diego) made his perpetual profession.

Their bold and faith-filled “yes” ignited an explosion of joy that was felt by all who attended, including my parents!

On behalf of all the brothers, thank you very much for all your prayers and support!

May God bless you all!