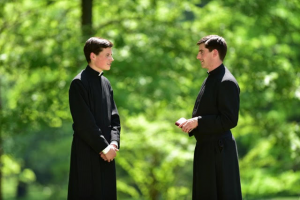 Fr. Simon: Br. John, tell us about your two years of Novitiate.

Br. John: It has been a time to deepen in my knowledge and love of Christ. Everything has taken on a much deeper spiritual significance.

Fr. Simon: What attracted you to the Legionaries?

Br. John: I was always attracted at the call to give of myself to a great mission. There was always great beauty and simplicity in the Legionary vocation. It is a call to live the gospel in a real way: prayer and apostolate.

Fr. Simon: What does religious profession mean for you?

Br. John: It is a special call to follow Christ up Calvary and join him on the Cross poor, chaste, and obedient.