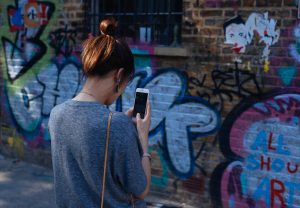 Despite the old joke I tell my kids, I really didn’t walk 25 miles to school in the school, uphill both ways.  I either lived with a mile of school – or took the school bus.

Taking the bus wasn’t a thrill, but at least I spent the time waiting with a couple good friends in the neighborhood.  We talked sports, books, television and, occasionally, homework.  The important thing is that we actually talked to each other.

A few days ago, I was driving to grandma’s house in the morning and found myself following a school bus along its route, which meant stopping every few blocks while the bus loaded its students.  I’m guessing the bus was bound for a junior high school because the kids were too big to be cute munchkins and too small to be pretend-adult high schoolers.

But unlike my buddies and me a few decades ago, they were not talking to each other.  Every stop had a small crowd of kids looking at their cell phones.  Most were pecking at the phones, either texting or playing games.

In passing three stops I didn’t see any kid actually talking to another kid.  There were a couple who didn’t have phones – they were pecking at iPads (or some similar tablet).

And there were a couple kids who were just standing around looking lonely and bored, apparently the product of technology-resistant parents who thought they should interact with real live humans.  Of course, they would have to find one who wasn’t glued to a screen.

Technology mavens probably think what I just described is a sign of progress, of the beautiful interconnectedness of humanity.  Those adolescents may be connecting with like-minded souls around the world, sharing brilliant insights and inspiring thoughts.

More likely, they are trying to break their records at Angry Birds.

These bus-stop scenes seemed unnatural to me.  The kids were mesmerized by their devices, seemed almost to revere them.

An idle activity had become more like idol worship.

This led me to a silly fantasy – that all these kids were reading the daily missal on their smart phones, or perhaps a book by Pope Francis.  I know, what a crazy thought.  But I’m going to be watching for a kid holding a rosary instead of a phone and praying he sets a trend.

One Response to Idle worship