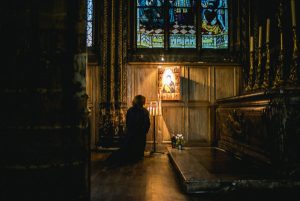 She was one of those little old ladies you see often in our parish:  kneeling, praying the rosary, lace head covering, a look of quiet piety.  Ah, what a devout Catholic.

Mass had started, but I was still in the confessional.  When I finished, Father told he if anyone else was waiting, tell them to come back after Mass; he needed to stop during the service.

I opened the door and found myself face-to-face with the aforementioned little old lady.  I whispered to her Father’s directive, expecting a knowing nod in return.  Instead, she muttered that Father was a jerk, an inconsiderate and worthless priest.

I admit my image of this lady changed a bit.  It became difficult for me to see her as a devout Catholic.

This happened several years ago, but came to mind in recent days as various people professed to be “devout Catholics” in the context of supporting abortion, gay marriage, kindergarten sex education, transgendered bathroom choice or whatever.  It got me to wondering what constitutes “devout” with regard to Catholicism.

Devout likely is in the eyes of the beholder.  And there are many characteristics that might make a person appear devout:

Some politicians support abortion, claiming their Catholic faith says they should care about poor women who need to be freed of the burden of a baby.

Some politicians support same-sex marriage, claiming their Catholic faith calls on them to be compassionate to those with an alternative view of God’s plan for marriage.

And of course is the infamous:  I’m personally opposed to XXXX but won’t impose my moral judgements on others.  This usually is applied to abortion, but what about a host of others evils prowling the world these days – slavery, honor killings, religious persecution?

At minimum, a devout Catholic would try hard to live a Christian life, follow the teachings of the Church and make sure those teachings inform every decision he makes.  This is especially important for politicians, because laws really are derived from moral beliefs.

I can’t imagine ever calling myself devout.  My reality is too far from the ideal

Perhaps I am a practicing Catholic, but only if I concede I’m a Catholic who needs much more practice in his faith.