Padre Pio does it again 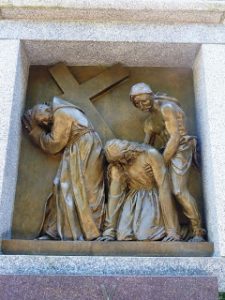 Not again! Why was someone knocking at my door? Another broken light switch, no doubt. I ignored the knocking and continued my studying.

I was nearing the end of my time in Rome. Electrical work always came easy to me, but my talent had become something of a nuisance as more and more of my fellow seminarians asked me to help them with their electrical woes at all hours of the day. I was studying to become a priest, not a handyman.

And I was focused. I had to pass all my theology exams. And, well, only a week before I had taken store of my time in Rome. I remembered with satisfaction my many visits to Assisi, the home of Saint Francis. And Siena, Saint Catherine’s hilltop hometown. Some dear friends and I had visited Loreto, where the Holy Family’s house was. Monte Cassino and Subiaco had been beautiful, truly Benedictine places. And I had visited every single holy place and Church on my list in Rome many, many times.

Only Padre Pio remained. Back when I first joined the seminary I had read a book about this humble, holy, Capuchin priest who bore the wounds of Christ – the stigmata – in his body. And ever since, I had wanted to visit the town where he had spent the last 52 years of his life. It was called San Giovanni Rotondo, and unlike most of the other holy places I had visited, there was no easy way to get there. It lay on the other side of the snow-capped peaks of the high Appenines, four hours by car, if you were lucky enough to have a car. And I wasn’t.

So I pleaded with Padre Pio, “Come on Padre Pio, get me to San Giovanni.”

I had learned that trick from an old Italian friend in Milan. Whenever she walked by the framed picture of Padre Pio in her house, she showed me how she would grab Padre Pio’s beard and give it a playful shake, telling him, “Don’t forget about us, Padre Pio.”

Fast forward exactly a week after I had made my request to Padre Pio. I had ignored the first knock on my door and continued my studies. Then came a second knock. This one was tenacious!

Reluctantly, I pushed my chair away from the desk and made my way across the room. Ever so slowly, I cracked open my door and peered into the hallway.

And what a surprise, it was Father Timothy, my Vice-Rector.

“Brother Kevin, do you know how to drive manual?” he asked.

I shook my head a little, trying to get my head around his question. “Yes, uh, yes I do,” I replied hesitating, still determined to defend my study time, even if it was the second-in-charge priest asking.

“Father Alex and I had planned a trip to San Giovanni Rotondo, you know, the Shrine of Padre Pio, and the rental car we got is a manual, and neither of us can drive it.” 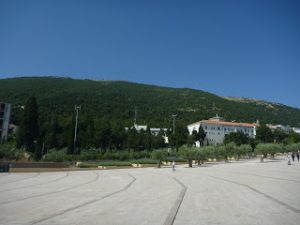 My head was spinning.

“Can you?” he asked, hopefully.

I moved my lips a little, not believing what I was hearing. I had spent the last five years of my life in Rome, and only now, precisely a week after I had asked Padre Pio, I was being invited on a fluke to visit his shrine! And I had told no one of my request!

“Sure, when do you want to leave?” I asked, hardly believing this was really happening.

“Oh, in ten minutes would be nice,” he replied. 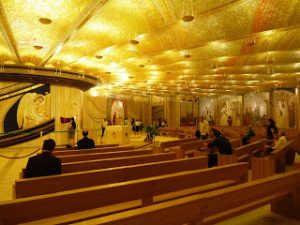 praying in the crypt church

In ten minutes we were pulling out of the driveway, headed for San Giovanni Rotondo. The drive was beautiful – you spend about half your time in tunnels under the Appenines – and the little town itself was definitely a holy place. I always tell people how much I was shocked by the condition of the hospital there. I had been to many hospitals in Italy, and most left much to be desired. But this hospital, founded by Padre Pio himself, was clean and well-run, and truly cutting-edge. 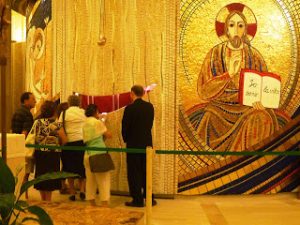 The same little church where Padre Pio heard up to as many as a hundred confessions a day was there. We visited the choir loft where he received his stigmata, and his monastery room to which hundreds of letters would arrive daily. The new Shrine there was a bit skate-parkish, but the crypt where Padre Pio’s body is was a wonderful place to pray.

And mine was a prayer of gratitude. I asked Padre Pio’s blessing on my theology studies, and on my future priesthood.

It pays to have friends in heaven!

PS: Ok, this might sound crazy, but I just looked at my journal for that day. There I listed the requests I had made of Padre Pio. One of them was that my little brother John Paul would be able to talk. He can now.  I hadn’t even made the connection. Wow! Read about my brother talking here.

So literally minutes after I sent out the last cobblestones about Padre Pio, he did it again.

I was kneeling in our chapel doing night prayers with the other priests. Ever since I wrote a book about a young Mexican Martyr, Blessed José, I’ve had a special devotion to him. When I first started writing the book in 2004, he wasn’t even “Blessed”. Part of my hope in writing his story was to spread word about him and maybe help in the push for him to be canonized – named a “Saint”. But that seemed like such a huge hurdle, that I didn’t really think it would happen.

Fast forward to last January, when Pope Francis suddenly announced that he would canonize Blessed José.

He set the canonization for October 16th.

But I’m a religious, took a vow of obedience, so I can’t just up and decide to go to Rome. I had to ask for permission.

With the date getting close, this last week was painful. I hadn’t heard anything either way. I kind of assumed it was a no-go.

So I’m kneeling there, just having written the story of Padre Pio’s getting me to visit San Giovanni Rotondo, just having reread my journal and realizing that he had given me all the graces I asked him for (like letting my little brother talk), and it hit me like a ton of bricks: I had to ask Padre Pio. To get me to Rome.

And so I did. I told him – and even wrote it down – “Padre Pio, if you obtain for me the grace of visiting Rome for Blessed José, I will do my utmost to visit you!”

Bam. As I wrote those words, I knew he had answered my prayer. Have you ever felt that? I did. I just knew it. I wanted to check my email right then and there… but decided to wait till the next day.

Sure enough, after Breakfast when I opened my inbox, the message was sitting there. “APPROVED”. Hurray!!!

So I’m going! God is so good! And Padre Pio is awesome!  (And I’d better make it over to San Giovanni Rotondo while I’m there 🙂 )

Please let me know if there’s anything you’d like me to pray for during my pilgrimage.

3 Responses to Padre Pio does it again