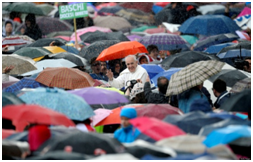 Pope Francis revealed in Evangelii Gaudium (n. 27, quote at bottom) that he has a dream for the Church. The dream is of a Church that is fully “mission-oriented” and less concerned with “self-preservation”. It would be a Church that turns outward into the streets of the world instead of turning in on itself. Last month I am so thankful that I had a chance to fully understand what the pope has in mind. I was blessed as chaplain to the Regnum Christi apostolate Mission Youth to work for over a month with various missionary projects in Latin America.

What happened was the following. Over a year ago I came across a parish that was starting a new fund-raising campaign. The project was a covered walkway and entrance to the church. The problem? When it rained, people were getting wet while getting out of their cars on the way to mass.

On the surface, this seems like a good idea, sort of like heated sidewalks to melt snow and ice, or like heated holy water fonts to avoid uncomfortably cold holy water. I imagine the hours of committee meetings, fund-raising campaigns, fish fries and pancake breakfasts needed to support these projects are also good ideas and justifiable. But a few weeks in Mexico has made me go a bit below the surface.

Mission Youth was operating in central Mexico, near the city of Puebla. Being a mountainous region, the place was prone to sudden, heavy thunderstorms. But all of us missionaries were determined that the weather was not going to stop us from building a brand new church for a small village.

One day a hail storm blew in suddenly dropping hail the size of marbles at the worksite. We all ducked under nearby scaffolding for protection. This soon proved to be not much help as the hail was striking all sides. Plus the scaffolding contained a pile of wet cement just over us. This cement was now pouring down on us from above.

So in the middle of the storm we ran into the small wooden chapel nearby that had served for years as the village church. It was just a little hut, barely large enough for 10 people. We sat down on the wooden benches to wait out the storm.

After about five minutes sitting there in the dark, there was a shuffling of footsteps at the door. It opened and the silhouette of an old woman from the village appeared in the doorway. She was a bit surprised to find ten men inside, but her surprise was only momentary. She looked past us to the crucifix on the wall. Entering in, she knelt down in the center of the hut, actually in the middle of us and pulled out her rosary. Soon she was lost in prayer.

I sat watching her for a moment and realized that this woman had left her home during the rain storm. She would have looked out the window of her home toward the church and seen the rain and hail. Instead of staying safely home she had put on her shawl and ducked out into the storm. Nothing would stop her from her 3 o’clock appointment with the King of Kings.

The rain let up after a time and we headed back outside to continue working on the new church. About an hour later a light rain came back. This time we pulled up our hoods and kept working. To my deep surprise, in the middle of the rain, I saw one by one the villagers leaving their homes and gathering in front of the wooden chapel. Soon the local priest showed up as well and the villagers began a Lenten rosary procession from the chapel off toward a shrine a few miles away. The people had gathered in the rain! The weather was never going to keep them from honoring God.

Now back home in Chicago, this memory has helped me understand the dream of Pope Francis. Why is it that a little rain keeps us “first-world” Catholics away from church? Why do we spend money on covered parking lots and heated sidewalks? And why do we spend so much time in meetings talking about these “self-preservation” projects instead of being missionaries out walking in the rain of this world? I know Francis is right. A church out in the rain is wet and cold, but it’s the Church at its best!

Pope Francis in Evangelii Gaudium #27: I dream of a “missionary option”, that is, a missionary impulse capable of transforming everything, so that the Church’s customs, ways of doing things, times and schedules, language and structures can be suitably channeled for the evangelization of today’s world rather than for her self-preservation. The renewal of structures demanded by pastoral conversion can only be understood in this light: as part of an effort to make them more mission-oriented, to make or¬dinary pastoral activity on every level more in¬clusive and open, to inspire in pastoral workers a constant desire to go forth and in this way to elicit a positive response from all those whom Jesus summons to friendship with himself.

Fr Michael Mitchell was born in Little Rock, Arkansas, the second of 10 children. Presently, he works as a vocational director and youth minister in Chicago, Illinois.
View all posts by Fr Michael Mitchell LC →
This entry was posted in RC Live. Bookmark the permalink.