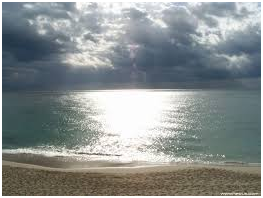 There is something about the ocean that makes you want to simply sit still a while and simply gaze out upon it. After a little bit of fun playing in the waves or lying in the sun, a day at the beach ends with simply sitting on the beach staring out into the ocean, or perhaps walking along the beach in silence with a good friend.

Paging through the Divine Mercy diary of Saint Faustina one phrase that is repeated over and over throughout is “ocean of mercy”. It doesn’t surprise me at all. It seems to me that Jesus’ unending and infinite love for us is best captured only by the immensity of the ocean. I had this truth confirmed for me beautifully this past week.

I was chaplain for a missionary group to Nicaragua. The missionaries were using their spring break to help build a school and work among the poor in this country. Our mission center was located on the beach itself, and so the backdrop of many of our activities was always the vast expanse of the ocean.

I felt this week that the ocean as an expression of Divine Mercy is not something that we chanced upon, but rather something God himself designed into his very creation. The Father created an infinite expanse of the universe overhead and an infinite ocean below as a reflection of his infinite Divine Love. This Divine Pedagogy has a purpose and God is speaking to us through it.

As customary, one night after the sun had disappeared under the horizon, I offered the missionaries the opportunity for the sacrament of reconciliation. Looking around the only available spot was outside of our house on the beach. So I carried out two plastic chairs and a flashlight and sat down.

That night the stars were bright and brilliant as there was no moon to outshine them. In the darkness the ocean waves were heard more than seen. The tide was coming in, so the waves were creeping ever closer to where I was sitting.

That night the advice I gave to the missionaries was centered on the image of the ocean. With every absolution, I myself understood a little more the infinite love of God. Pouring out mercy in the sacrament, and knowing that the amount of Mercy God has in store for all of us is infinite, like the ocean.

As I finished up the confessions, the tide had come much closer. God had one little reminder for the last missionary to approach the sacrament. As we stood up to go, a final wave crashed onto the beach with enough power to sweep across the beach and run over our feet. It was a final good bye and confirmation from God for the night!

The Mercy of God is an ocean. Our weakness and failures, no matter had many or large, will always be but a drop in that ocean of love. All we need but do is come to the beach, which is opening your heart to God. He will do the rest!

Fr Michael Mitchell was born in Little Rock, Arkansas, the second of 10 children. Presently, he works as a vocational director and youth minister in Chicago, Illinois.
View all posts by Fr Michael Mitchell LC →
This entry was posted in RC Live. Bookmark the permalink.

One Response to Oceans of Mercy