A Thank-you letter with 31,000 signatures 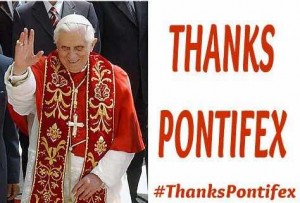 As I mentioned last week, I organized an event to thank our Pope (Emeritus) Benedict XVI on Twitter. In the end, we sent out 31,742 messages with the #ThanksPontifex hashtag, with 3,971 right at the hour he ceased to be Pope. At that point, #ThanksPontifex was trending 3rd in the USA.

I want to thank all of you who participated. And I want to offer you the letter I sent Benedict XVI. For those who want to write the Pope Emeritus:

The whole world is grateful for your service to the Church over these past 8 years. It would be hard to express our gratitude fully so we tried in the best way we could. A few days before you stepped down, a few of us on Twitter had the idea of getting thousands of people to tweet #ThanksPontifex and their reason for gratitude. It would be like a thank-you card with Thousands of signatures.

On the 27th and 28th of February, 31,742 messages of gratitude were sent out from all the continents of the world to thank you. When you stepped down at 8pm on the 28th, 3,971 tweets of gratitude went out in one hour. Many are thankful that you were an example of humility; that you were an example of prayer; that you taught them with Jesus of Nazareth, Deus Caritas Est, Caritas in Veritate, and Spe Salvi; that you were a real father showing loving care; that you stood up for the faith in a secularized world; and that you lead the Church. Most used the standard methods, but a few teachers gathered Thank yous from their class then tweeted them. We offer you a selection of tweets in various languages to represent our collective gratitude.

[@Cardinal_Wuerl] The papacy of Benedict XVI has ended. The Chair of Peter is vacant. Thank you, Holy Father, for your faithful service. #ThanksPontifex

[@AlliSeeIsChrist] #ThanksPontifex for teaching us the true meaning of humility and embracing the crosses Jesus asks us to carry. Enjoy your retirement!

[‏@iPadre] @Pontifex Thank you for your contribution to the Sacred Liturgy. You are the father of the New Liturgical Movement! #ThanksPontifex

[@LT_EllenC] I’m just extremely grateful for all you have done for our Church. Thank you for your beautiful witness of Christ’s Love! #ThanksPontifex

[@schndersa] #Thankspontifex thank you for your wonderful example to the World.

As you promised in your final audience to accompany us in prayer, we promise to accompany you in prayer as friends while you begin this final pilgrim stage of life. As they say on Twitter #GBU (God bless you).

Yours Sincerely in Christ,

Since messages came from every continent I couldn’t collect everyone’s signature. Instead, here’s the first 1000 people I found tweeting #ThanksPontifex.

[For the list of twitter users or the German I actually sent to the Pope, go to the source.]

P.s. If you want a special intention for your prayers, both Br Georg Rota, who translated this, and I will be ordained priests this year, God willing.