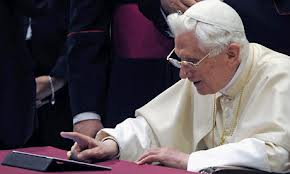 You never know the effects of something small. You can see part of my room on one of the staircases in the house and several brothers told me that they are reminded to pray by the images of the Sacred and Immaculate Heart on my desk.

I have a separate blog about youth ministry which was attracting 20-50 views per post on different ideas for those working in Catholic youth ministry. Saturday, I posted this idea there as #ThanksPontifex Twitter Storm – February 28, 7:45. Then I logged off. Sunday, I go to check and it has 900 views and my little Twitter list of those who want to participate has 150 people signed up (several who have 1000s of followers).

I guess this little idea of mine might end up as a big idea. I invite you too to participate. If you are on twitter, tweet “#ThanksPontifex [and what you’re thankful for]” on the 27th and 28th concentrating on the moment he resigns (7:45 to 8:15pm Rome Time on the 28th).