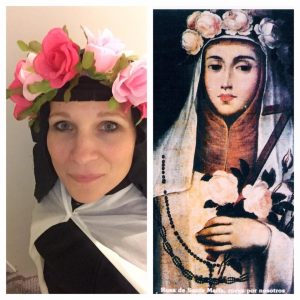 Nailed it! (me as St. Rose of Lima at the All Saints Day Party)

I was really excited a few years back when I got St. Rose of Lima as my patron saint. I didn’t know much about her, but most of the images I found of her were lovely: she was usually portrayed in a garden, almost always with a beautiful crown of roses on her head. I didn’t know what she’d done to become a saint, but she sure looked good doing it! In January, I had already started planning my St. Rose of Lima costume for our church’s All Saints Day Party in November, sourcing fake roses from the dollar store for my crown. I was sure Rose and I would become great friends over the year.

And then I met her. We had absolutely NOTHING in common. She made a vow of virginity at the age of five (I did not). By the age of six, she had already given up eating fruit for two years and was now subsisting on a diet of stale bread and tepid water (at that age I refused to eat anything that made “a weird noise” when I chewed). She performed extreme mortifications of all kinds: she rinsed her mouth daily with sheep’s gall, wore a horse-hair shirt, scourged herself several times a day, and allowed herself only two hours of sleep a night (which is not surprising, since her bed was an atrocity she lovingly hand-crafted out of tree roots and broken crockery, with a piece of wood as her pillow). She even kept her eyes lowered when visiting a new place, denying herself the joy of curiosity and wonder.

What could I learn from a woman who took suffering to such an extreme, whose mortifications were sometimes described as severe, harsh, and even cruel?

As I kept searching for something this crazy suffering-loving saint could teach me, I learned that Rose’s mother had wanted her to get married (for the financial advantage of the family), but unfortunately, she had already taken that pesky vow of virginity at the age of five. Rose tried to sabotage her mother’s attempts to marry her off by ruining her natural beauty for which she was known and named; she chopped off her hair and rubbed her eyes with pepper. Finally, realizing what her vow of virginity and desire to join a convent was costing her parents financially, Rose became determined to earn an income for her family. She grew and sold flowers, as well as embroidery, at which she was especially skilled. Her plan backfired somewhat, however, as she provided so much money for the family from these endeavours that they refused to let her move out and join a convent!

Poor St. Rose of Lima. All she wanted to do was live a quiet life in a convent somewhere, pursuing the exceptionally holy life to which she felt called. Instead, she had to earn an income for her family and try to live the life of peace and holiness she longed for in a house full of grumpy people and constant distraction. Ah, that sort of sounds familiar.

I don’t plan on adopting a diet of stale bread and tepid water, or replacing my pillow with a block of wood, but that doesn’t mean I can’t imitate St. Rose of Lima. I can sanctify my ordinary life by offering up the hidden sufferings of my day: the noisy children when I just want quiet, the fighting siblings when I long for peace, the family member who needs to talk when what I want is solitude, the jam-packed schedule when I long for free time, the raucous supper when I want a quiet meal, the crying child when I just want to sleep.

By the time she died, St. Rose of Lima was so popular that her body had to be buried in secret, and her cause for canonization began immediately. But it wasn’t her “cruelty” to herself that drew people to her; it was her unfailing tenderness towards them, in the midst of a life that was far more chaotic than she ever would have chosen. I totally get that.