Heirs in Valor of the Champions of Old 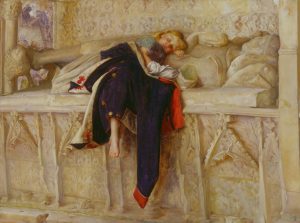 Struck is the heart when the realization that the young girl in the foreground lays wounded on a tomb as a war rages outside the place where she sleeps. There she is, beautiful and innocent as can be on a cold tomb of marble, a soldier’s coat the only giver of warmth. Gone are the days when children could sleep in peace on a warm bed and be cuddled by their mother’s embrace. However, it is wartime now and even the youth are liable to pay the high price of being on “the wrong side of the war.”

Her little hand wrapped in bandages makes us hope for the best while preparing for the worst. Has L’Enfant lost her hand? Has she been badly wounded? Will she recover? We might never have these questions answered for they belong to an uncertain place and an uncertain time. This painting depicts no one little girl. It is our lack of precise knowledge of the scene that makes it all the more painful as we recall that this might not represent a single child but the many pained by the atrocities of war. At best they will be scarred for life, at worst paying with their own life-blood for the sins of the nation.

However tragic, I find this painting to transcend that whole composition of the place of war and bring us a rather tender scene. Having wandered into my own musings on the horrors of war without notice, I came back out wondering why the painting still has a rather warm feel to it. The lighting seems to bounce off a reddish glow, perhaps a fire lit to keep the young casualty warm. Even in this odd circumstance, the child can still find rest. Her presence bears the power to turn this cold moment into a warm and tender scene. For the Romantics especially, a child has that ability to bring beauty and joy, innocence in the face of the horrors of war. That is why the war wages on but somewhere in the distant corner. We are left to contemplate the child.

Beyond just the warmth the child brings, this the tomb where L’Enfant rests is itself an important asset for the understanding of the meaning the painting holds tightly bound. The tomb, it seems, is of a knight laid to rest forever within this building of stone. It makes one reminisce of the good old medieval age that this once-Pre-Raphaelite brother, Millais, admired. Could it be a reflection of the gallantry of the brave soldiers of the past, protecting the innocent and giving their lives to defend what good and beautiful is left in life? If so, the little girl dangling from an ancestral tomb is the result of a heroic deed, of a chivalrous task carried out by the heirs in valor of the champions of old.

This little one has been rescued, sheltered and protected by a grenadier of the regiment. In the romantic spirit of medievalism, she represents the beauty to fight for and defend, the princess for which a man must lay his life.

L’Enfant dreams as she sleeps on stone. She dreams of the Chevalier, the castles, and the glory, she dreams of a far-off place of safety where she loiters in peace. She dreams because the men at arms fighting in the distant corner fight for her life.