The Hour of Br. Anthony 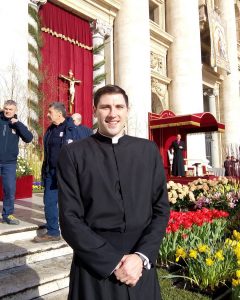 Nothing in life is more distressing or puzzling than when someone dies expectedly, particularly when I/we don’t think they should die.

Many people are aching in their hearts today upon learning of the death of Br. Anthony Freeman, LC.  Br. Anthony was not quite 30 years old and a year away from ordination as a Legionary priest. Sometime between Easter Sunday night and Easter Monday morning he died in his room at the Legion seminary in Rome, apparently quietly and of natural causes.

I didn’t know Br. Anthony well and wouldn’t be able to say he was a close friend. But I had met him on several occasions over the years and shared dinner with him at the seminary about 18 months ago. 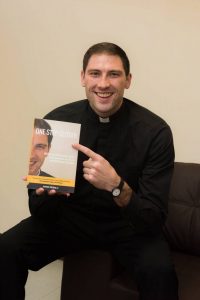 He shared the draft of a book he wrote with me last year and we discussed a few ideas.  That book was published just before Lent: One Step Closer: 40 Doses of Motivation, Hacks, and Experiences to Share with Millennial Catholics.

No one would mistake me for a millennial, but I enjoyed his book and used it as a daily meditation during Lent (40 doses for 40 days).  I intended to send him a note this week telling him how useful I found it to be, despite my post-millennial age.  Instead, I’m writing this in memory of a young man who was in a real way a spiritual mentor to me.

The last 10 days of Br. Anthony’s life were remarkable, perhaps unique.  He went on an eight-day silent retreat. Easter Sunday, he met Pope Francis and served during Easter Mass.  That evening he died.

Christ is Risen Alleluia!
.
After an 8 day silent retreat I was blessed to meet Pope Francis today and serve the Easter mass!
.
This photo during the practice will have to suffice since the official Vatican photos aren’t out yet…
.
Thank you so much for your prayers during my retreat! Literally this past week of intense silence not to mention the past 48 hours have been very special moments with God and also with others. The joy and sadness and hope of life are sometimes condensed in small moments, this was one for me and spiritually this moment of the Passion and Resurrection of our Lord is what gives these moments its fullest meaning and expression!
.
Easter Blessings!👋
#vatican #popefrancis #easter #stpetersbasilica

Fr. John Connor, LC, wrote a memorial letter, which is posted on the Regnum Christi website. There is a website where you can share your condolences and memories of Br. Anthony. And you can see his biography here.

I will miss Br. Anthony, but my memories of him are positive and inspiring.  His death is a vivid reminder that none of us knows the hour of our death and we need to be prepared.

Br. Anthony was likely better prepared than most of us. And his departure leaves me with much to ponder in my heart.