He went off with him, and a large crowd followed him and pressed upon him.  There was a woman afflicted with hemorrhages for twelve years. She had suffered greatly at the hands of many doctors and had spent all that she had. Yet she was not helped but only grew worse. She had heard about Jesus and came up behind him in the crowd and touched his cloak. She said, “If I but touch his clothes, I shall be cured.” Immediately her flow of blood dried up. She felt in her body that she was healed of her affliction. Jesus, aware at once that power had gone out from him, turned around in the crowd and asked, “Who has touched my clothes?” But his disciples said to him, “You see how the crowd is pressing upon you, and yet you ask, ‘Who touched me?’” And he looked around to see who had done it.  The woman, realizing what had happened to her, approached in fear and trembling. She fell down before Jesus and told him the whole truth. He said to her, “Daughter, your faith has saved you. Go in peace and be cured of your affliction.” (Mark 5:24-34) 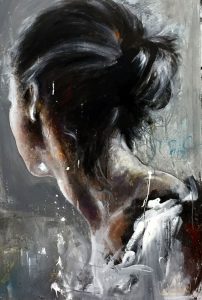 “Who touched me?” (Mark 5:32) Wounded and hidden behind layers, masks, accomplishments, each woman can secretly relate to the pain of the nameless hemorrhaging woman in the Gospel.

Perhaps she is left nameless because she is there with Christ in place of each of us.  We are each her. Something inside each of us bleeds and begs to be healed, but we know not how, so we hide it, afraid of being seen as damaged, imperfect, not good enough, ‘unclean’.

Some of the wounds we conceal are caused by others or by difficult circumstances, some are lies we have believed about ourselves, some are our sins or the effects of our sins.

“She had suffered greatly at the hands of many doctors, and had spent all that she had.” Mark 5:26. We try to cure ourselves, going to many ‘doctors’- whether physicians, exterior achievements, diversions or escapes.  Like her, we spend our whole treasure trying to heal ourselves, we exhaust ourselves and all of our resources.  But the wound still bleeds inside.

“She had heard about Jesus.” (Mark 5:27). She knew of Jesus, but she did not know him.  Like her, we somehow see Christ in the distance, and recall what we have heard about him from others, whether as a child from our parents, from friends, from something we read on social media.

“If only I touch his clothes, I will be cured.” (Mark 5:28). Again, her mind spins to trying to be the protagonist of her own healing, anonymously, hoping He might not even notice what she would do. 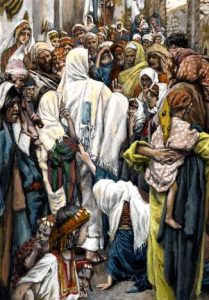 “Who has touched my clothes? Who touched me?” (Mark 5:31). When she was healed, why wouldn’t He leave her be?    He knew whom He had cured.  He knew her.  Why did He demand that she expose herself, turning around insistently and asking her to reveal herself?

If He had not done this, if he had let her slip silently away, she would have left healed of the hemorrhage, but still thinking, ‘I cured myself with my own actions, by touching him.’ The lie about her worth being in what she does and accomplishes would still be in her heart.

Christ wanted her to feel His tender gaze and to know it was not her touch, but HIS, that cured her.  He needed her to know that the touch was not stolen, but given in love.  He insisted on showing her that she could not cure herself and that she need not hide. She was known and loved. 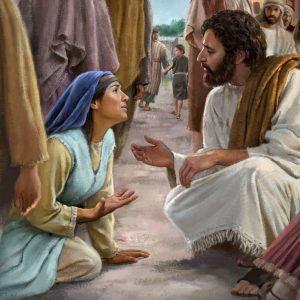 His gaze told her all of this.  It gave her the courage to spill her heart’s suffering, hopes, fears… she “told him the whole truth,” (Mark 5:33) that had been hidden and silent for so long.  And as she spoke, her gaze in His, her cure deepened.  She was healed, not just of her hemorrhage, but of her shame, her fears, her sins.  Jesus, looking at her, loved her.  And that love made her whole and beautiful and strong in ways her own efforts and masks never could.  She saw that His touch, and his gaze, changed her in ways that she could never change herself, no matter how hard she tried, or how much she spent on cures.

When You regarded me,
Your eyes imprinted in me Your grace:
For this You loved me again,
And thereby my eyes merited
To adore what in You they saw
– Spiritual Canticle XXXII, St. John of the Cross

We are all she.  Each time our soul, our mind, or our heart hemorrhage, we need to reach out, touch Jesus, and let Him touch and heal us, allow Him to heal us in his gaze, imprint His grace in us. 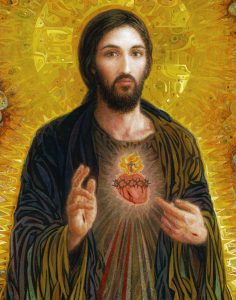 Regarding us tenderly, Christ shows us His own wounds, wounds that heal, redeem and transform ours.  Given to Him, our wounds become doorways of grace, cracks that love can shine through to enter the deepest parts of who we are.

Christ touches not just His clothes to our outstretched hands, but His wounded heart to our wounded hearts and those wounds together become the way to our healing, a bond of love between us.

“From all My Wounds, like from streams, mercy flows for souls. But the Wound in My Heart is the Fountain of unfathomable mercy. From this Fountain spring all graces for souls.” – Jesus to St. Faustina, Diary #1190

What we discover is something we never suspected. Through our own wounds, Jesus opens His wounded heart to us.

More than simply being healed, we are able to enter into Jesus’ Heart and be united with Him in a way we never could have his Heart not been wounded. Had we always been as perfect and unblemished as we had once desired to be, had our wounds not been brave enough to reach out with trust, we would never know how much we are loved.