My Moment with Emanuela 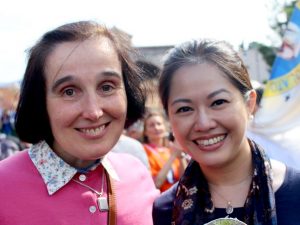 I had the opportunity to participate in the “March for Life” in Rome on Mother’s Day in 2016.  This is an annual event where all with the same belief in the dignity of human life gather to join in prayers and march in faith to offer hope to a world of despair.  During the event, I had the honor of meeting Emanuela Molla, the daughter of St Gianna Molla, the heroic mother who followed the example of Christ and chose to give up on cancer treatment during pregnancy, hence, her own life, in order to save the life of her unborn child, Emanuela.  I shared this encounter and the heroic story of St Gianna online, which raised many questions on whether St Gianna’s suffering and sacrifice was really necessary and worthwhile.

“What is truth?” (Jn 18:38), Pilate asked Jesus.  His question suggests “the distressing perplexity of a man” (Veritatis Splendor 84) who no longer knows his true own identity, where he comes from, and where he is going.  This is one question that we find ourselves faced with, “the question of man himself, of his truth, and of the moral consequences flowing from that truth” (VS 83).

Pope St John Paul II clearly defined moral absolutes: the negative precepts of God’s law are universally and absolutely binding on everyone in every situation regardless of the cost (VS 52).  The precepts of God’s laws that indicate that something is evil are absolute, they are choices that are prohibited.  For example, in the Ten Commandments, you shall not murder, you shall not commit adultery, you shall not lie, you shall not steal.  These are absolute. These acts are not open to discussion or question as these choices are intrinsically evil as the precept indicates.  They are true always, under every circumstance (William May, Introduction to Moral Theology, p. 142).

The concept of moral absolutes only works if you have a proper understanding of the moral act.  The magisterium proposes some “exceptionless” norms as true, that are morally excluded, such as “deliberate killing of the innocent, adultery, remarriage after divorce, fornication, contraception, the generation of human life in the laboratory etc.” (William May, Introduction to Moral Theology, p. 141).  It affirms that there are intrinsically evil acts, which “radically contradict the good of the person made in His image” (VS 80).  These are choices that are in themselves intrinsically evil and the willingness to do this or to engage in this kind of behavior is always a disordered will.  No matter what intentions, no matter what circumstances you might find yourself in, the willingness to do certain things is incompatible with moral goodness and especially the Christian life.

This also reaffirms the Catholic belief on the moral act, that there is a specific way about our behavior as a foundation or a basis for being able to think about moral absolutes.  “If there are no absolutes, reasoning collapses into incoherence and yields no conclusions” (Francis Canavan, “A Horror of the Absolute”, Human Life Review, Winter 1997, p. 93).

Why Do People Reject Moral Absolute?

Fr John Courtney Murray, SJ, once stated that “modern man has a horror of the absolute” (Francis Canavan, “A Horror of the Absolute”, Human Life Review, Winter 1997, p. 91).  Many people are comfortable living the Ten Commandments most of the time but they do not like their absolute nature because there is not an “opt out.” They prefer incoherence over certainty in fear of losing the freedom to choose their own lifestyle, so the “right to choose” has become an objectively valid and commonly held morality.

It is when people start to count the cost at the material and physical level of adhering to the moral truth, about the good and evil, that they begin to waver and question not only the truth and value of Gospel morality but even their own ability to live it.  Many people are like the rich young man in Matthew chapter 19 who just “went away sorrowful.”

This is precisely what Pope St John Paul II emphasizes in Veritatis Splendor, that not only is it always worthwhile to make the sacrifice for the sake of our moral integrity, but we have also got to believe that with the grace of God, we will have the strength to make whatever sacrifices that are asked of us.  We shouldn’t doubt the worth of our moral integrity, nor should we doubt God’s grace and ability to help us in achieving that moral integrity.  The attitude to make one’s “own weakness the criterion of the truth about the good, so that he can feel self-justified” (VS 104) is the sort of attitude that corrupts the morality of the society.  It is a rejection of the absoluteness of moral prohibitions which ends up “confusing all judgments about values” (VS 104).

Charity and the Value of Suffering

By denying and rejecting moral absolutes, we deviate from sound gospel morality, which eliminates the core of true Christian way of living, that is on the basis of charity, “the moral specificity of acts” (VS 75).  Having a life based on charity means precluding acts that are clearly incompatible with charity which is the real meaning of moral absolutes in Catholic moral theology.

As a follower of Christ, we need to see that there is a spiritual value to suffering.  We know that it produces endurance, character, and hope that does not disappoint because of God’s love for us.  We understand that suffering is something that cannot be eliminated in Christian lives.

Charity, in accord with the fundamental demands of the Gospel, can lead the us to “the supreme witness of martyrdom” (VS 89).  The martyrs of our tradition give the most eloquent testimony to the value of moral absolutes and to the moral significance of our faith (VS Chapter 3).  We should adhere to the examples of the saints and martyrs who defended the moral truth, “even at the cost of suffering and grave sacrifice” (VS 93).  We must be willing to make those sacrifices in order to maintain our moral integrity, live out our faith, and imitate Christ.

St Gianna demonstrated this core moral value of charity through her own choice of martyrdom. Although under ‘the principle of double effect’, meaning that there are times when it is acceptable to tolerate an evil effect of a good choice because the evil effect is tolerated and it is not willed either as a means or an end (CCC 1737), it would actually justify St Gianna to receive treatments and tolerate the death of her child.  This holy mother has heroically chosen martyrdom to exchange for the life of her child and her family, who has really “loved them to the end” (Jn 13: 1) like Christ.  The suffering that is required of her in order to embrace the moral truth was clearly understood by St Gianna, which she has said, “love and sacrifice are closely linked, like the sun and the light. We cannot love without suffering and we cannot suffer without love” (Thomas J. McKenna, St. Gianna Beretta Molla: A Modern Day Hero of Divine Love).  This is her moral affirmation that bears witness both to the inviolability of God’s law and to the sacredness of the dignity of man (VS 92).  As said by Pope St John Paul II at the Canonization of St Gianna, “the extreme sacrifice she sealed with her life testifies that only those who have the courage to give of themselves totally to God and to others are able to fulfil themselves.” (Homily of Pope St John Paul II, Canonization of St Gianna Moller, 2004).

In order to embrace the truth and the moral consequences flowing from that truth (VS 83), not only must we reject the intrinsically evil acts, it is also only by “acknowledging and teaching the existence of intrinsic evil in given human acts, the Church remains faithful to the integral truth about man” (VS 83).  For this reason, all moral judgments depend upon there being some moral absolutes and without them, our moral reasoning becomes a proportionalism with no final standard by which to measure them (Francis Canavan, “A Horror of the Absolute”, Human Life Review, Winter 1997, p. 93).  By committing to the moral absolutes, it fulfils the purpose of man’s true freedom because “there can be no freedom apart from or in opposition to the truth” (VS 96), in which the sacrificial act of martyrdom exemplifies “the high point of the witness to moral truth” (VS 93).