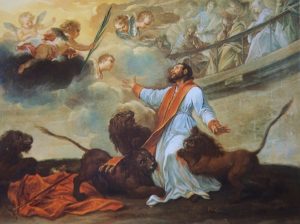 We often hear of St Ignatius of Loyola, valiant founder of the Jesuits.  Another Ignatius impacted the world with his faith many centuries before him, Ignatius of Antioch.

The persecution of the disciples in Jerusalem, Cyrene and Cyprus pushed the threatened evangelizers to go farther and farther abroad, extending the boundaries of the Kingdom.  It was Peter himself who went to Antioch and led the church there.  He found a man who would build a foundation of faith during uncertainty, clarity amidst confusion and fidelity surrounded by heresy. Several years later, St. Peter left Antioch for Rome.  After being ordained by the first pope himself, and then mentored by St. Paul and St. John, Ignatius became bishop of Antioch, where the bible tells us, that the believers were called for the first time, Christians.Sometimes we romanticize what it meant to be a part of the first Christian communities.  Seeing the saints and martyrs who emerged from them, we imagine them to have been cohesive and clearly convicted in the truths of Christianity.

The church at Antioch that Ignatius led was surrounded by factions which called themselves believers, but melted pagan heresies and distortions into the true faith that had been brought by the apostles, making it amiable to the required religious practices of the Roman government.  Early Church history tells us that Ignatius’ witness was steadfastly orthodox in the tide of these other groups like the Docetists who preached a Christ who only appeared to have become man. Docestism allowed people to compromise with the world by believing themselves Christians while avoiding the scandal of the Incarnation.  Christ to them was no more than any of the other Greek Gods and impacted their lives in no more personal way.

The confusion between these ideas led to tension between the groups at a time when those professing the crucified Christ were seen as hard-headed trouble makers and taken away for trial and execution.  Docetism, by its nature adaptable to compromise in almost everything, including authority and morality, was much easier for the Roman government to control than those who believed in the Crucified Son of Man and would not worship the God-Emperor. Naturally, the Christians were held responsible for the unrest.

In the midst of danger and confusion, Ignatius was a man of reason and strength.  While he was bishop, the emperor Trajan was at the height of his power and the Christians were the only organized group that would not submit to him.  In the year 106, Ignatius was brought before Trajan.  The Martyrium captures the words of the emperor to the saint:

“We command that Ignatius, who affirms that he carries about with him Him that was crucified, be bound by soldiers and carried to the great city of Rome, there to be devoured by the beasts, for the gratification of the people.”

It also relates the saint’s reply:

“I thank thee, O Lord, that thou has vouchsafed to honor me with a perfect love towards thee, and hast made me to be bound with iron chains like Paul!”  (Martyrdom of Ignatius, Ch. 2)

St John Chrysostom, who lived in Antioch in the 300s, tells us that the detachment of soldiers assigned to bring Ignatius to Rome were barbaric, and made the route to Rome twice as long as it could have been in order to discourage him.  Instead the long road strengthened Ignatius, who knew Christ was his companion.  Along the road that wound through Turkey, which St. John had visited and in which many small churches existed, clusters of Christians met him to offer their prayers, tears and encouragement.  In exchange, St. Ignatius wrote letters, collected as the Epistles of Ignatius, in which he thanked the believers for encouraging him while he was on the road in chains. In these epistles we find the first use of the term, “the Catholic Church.”

On December 20, 107 AD, Ignatius finally found himself in the spectacle of the 30 year old architectural wonder of Rome, the Colosseum. He was held below the stage in a dark cell, surrounded by the cages of men screaming in desperation and animals who had been starved into rage. On the stage above him, the day had been filled with shows by mimes and actors in the morning, then the gladiator fights in the afternoon. The evening brought the public executions of criminals, meant to shock and entertain the crowd, by then drunk and bloodthirsty.  Finally led into the arena to meet the death he welcomed with joy, Ignatius’ last words were “I am God’s wheat, and I am being ground by the teeth of wild beasts to make a pure loaf for Christ.”

The lions were released as Ignatius sank to his knees in prayer.  God honored his desire. The lions destroyed all but “the harder portions of his holy remains which were left. These were conveyed to Antioch and wrapped in linen, as an inestimable treasure left to the holy Church by the grace which was in the Martyr.”  (Martyrdom of Ignatius, Ch. 6)

His blood consecrated the Colosseum as holy ground as he joined the witness of his friends Peter and Paul who gave their lives in the same city, to inspire many more martyrs in the centuries ahead. We celebrate his feast day on October 17th.