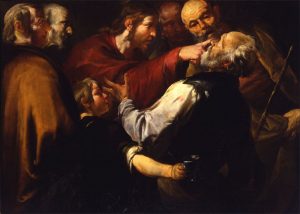 What an awful summer, filled with despair and destruction.

We pray for those suffering. We send money and supplies.  People who are able, volunteer their labor.

And we look for someone or something to blame.

Perhaps the hurricanes are the result of global warming, caused by industrial emissions, created by greedy capitalists.  On the other hand, history suggests that hurricanes happen and there isn’t much (if anything) we can do to prevent them.  Of course, we can build on high ground and run away when they approach.

As for mass killers, theories abound. Perhaps the Vegas killer had a miserable childhood.  Perhaps he ate too much refined white sugar.  Maybe he watched too many episodes of TV crime shows.

Or, he just might be an example of evil personified. Nothing complicated. Nobody to blame. Just pure evil.

A question since humans could think and came to believe in a power greater than themselves:  Why does God let this happen?

For primitive people, the explanation was simple, if likely inaccurate.  God was powerful and vengeful and if man did something God didn’t like, bad things would happen.  So…if there was an earthquake, someone sinned – or slacked off on sacrifices at the altar.

Some folks still think that way, assuming that this sudden spate of natural disasters is the result of unbiblical lifestyles, video games or mistreatment of farm animals.

Some brilliant, sensitive people have written on this subject.

Man’s Search for Meaning, by Viktor Frankl, tried to make sense of the suffering in German concentration camps during World War II.  Frankl survived years in the camps, his parents, wife and brother all dying.

When Bad Things Happen to Good People, by Harold S. Kushner, tried to make sense of the sorrow experienced when he learned his young son had a terrible disease and would live only a few years.

At the other end of the spectrum of elegance is the political saying, “Never let a good crisis go to waste.”  This has been attributed to everyone from Chicago Mayor Rahm Emanuel to Winston Churchill.  The inference is that a smart politician can use a crisis to his own benefit.  A rather cynical thought.

But I have a much less cynical view, and none of my friends would accuse me of being a Pollyanna.  I believe that as terrible as a crisis (hurricane, earthquake, mass murder) may be, it will unleash God’s grace and the remarkable nobility of the human spirit.

In Houston, fishermen in their small boats cruised flooded neighborhoods, rescuing threatened homeowners and ferrying them to safety.

In Mexico, college students (many from Anahuac University) searched for survivors and brought relief to those in need.

During the Las Vegas shooting, a young man shielded his fiancé with his body. She was safe; he died.

Bad things have been happening ever since Adam and Eve made a mess of things in the Garden of Eden.  But every bad thing has allowed good to surface.

I’ve seen it in my own family, where the debilitating diseases of an aging parent brought distant family members together to face a common challenge to provide care.  In one instance, the family member deemed least likely to make great sacrifices, did just that.

Perhaps we’ll never stop trying to assign blame when disaster strikes.  But it could be we’re looking at this backwards.  Maybe we should be looking at the good arising from the bad.

Recall Jesus’ healing of the blind man in the ninth chapter of John.  The disciples wanted to know if the man was blind because of his own sins or the sins of his parents.

Jesus replied (I have to think he chuckled a bit in doing so) that it was neither the sins of the man nor his parents “but this happened so that the works of God might be displayed in him.”

Yes, it has been a summer of disaster.  It also has been summer of God’s glory.

One Response to Days of Disaster