The Message of the Day 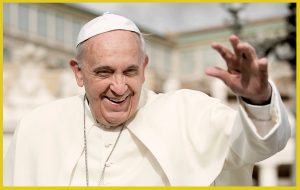 Have I got a deal for you!

You can get a daily video message from Pope Francis to inform and inspire you.  It comes in English, Spanish or Portuguese.  I promise it will be professionally produced, high quality and last little more than a minute.  (Yes, even those of you with attention deficit issues will enjoy it.)

Did I mention it is free?  It is…really.  And that probably makes you wonder who would (or could) do such a thing.

The people responsible are Kyrios, Inc., a private, communications company based in Reston, Virginia. The Message of The Day is delivered on demand via a large, sophisticated network, allowing media content to be delivered to a worldwide church audience. This project is the first of its kind. (I don’t understand the techie stuff, but it apparently a big deal that a heap of people can get this daily link and watch the video simultaneously.)

The company was co-founded by Fr Edward J. Dougherty SJ, a Jesuit missionary priest and founder of the Seculo 21 television network in Campinas, Brazil; and John S. Bolus, a US-based telecommunications entrepreneur.

“The Catholic Church needs to enchant its members, to be relevant to the lives of people today,” said Fr Dougherty. “We developed this project to promote our leader, to spread his positive messages and good news. Our beautifully produced videos are the perfect conduit for his messages. We want this to be accessible to millions of the faithful around the world, bringing hope and inspiration. Nothing else exists like this today. We hope that Catholic media channels can help us spread the word. ”

I subscribed a few weeks ago and have enjoyed hearing the inspiring words of Pope Francis – and seeing the joy of his delivery.  In addition to being FREE, it is EASY to subscribe.  Just go to The Message of the Day website, click on “Sign Up” on the top banner on the right, fill in a couple boxes and you are good to go.

Isn’t it ironic?  I see ads on television every night, with companies trying to sell me something I don’t need.  The Message of the Day is something I do need, and I just need to enroll.