Our mother is waiting 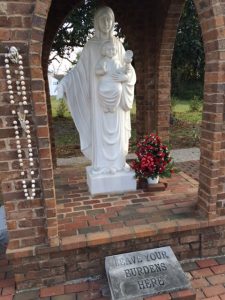 “God calls us through what happens during our day… He calls us to identify with Him and carry out His divine mission – right where He finds us.” – St. Jose Maria Escriva

Last week we stumbled upon a shrine to Our Lady in Kingstree, South Carolina. It’s located an hour north of Charleston. The county is the size of Rhode Island and yet there is only one Catholic parish! However, “Our Lady of Hope” has become a place of pilgrimage for Christians of all denominations.

What burden are you carrying? Please give it to Jesus through His Mother. She is waiting to help you.