One Legionary’s Experience of Francis’s Election 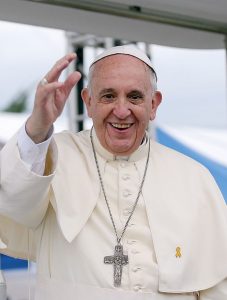 Today is the fourth anniversary of Pope Francis’s election so I thought it appropriate moment to share how I experienced it as a religious brother studying my last year of theology before ordination in Rome.

I believed the Canadian media: Cardinal Marc Ouellet wasn’t quite as shoo-in but, here the best odds of becoming Pope. Card. Angelo Scola was the other choice people were going for. A fellow Canadian Legionary had even entered “Isaac” into a contest for choosing the papal name based off our assumption Ouellet would be the next Pope.

I remember a plethora of articles in those days claiming that this Cardinal or that would become the next Pope and all the reasons for their choice. The only name other than Ouellet and Scola that seemed a serious contender to me was Cardinal Peter Turkson but he seemed like an outside chance. I don’t really remember one article promoting Card. Begoglio.

Several of those in class with me went down to St. Peter’s Square right after class on March 13 – I think a few even skipped morning classes, but I’m not snitching. It seemed like there was no obvious choice like Ratzinger had been in 2005. Given this fact, and considering it took 4 ballots to elect Benedict XVI, it seemed like it would take a few days for the votes to coalesce around one candidate. I stayed home, figuring I’d have better luck the next day.

I just started to get moderately large on Twitter. The first thing that bumped me over 2,000 followers was starting the #ThanksPontifex hashtag for Benedict XVI’s last day, 2 weeks prior. That afternoon I was at home working on some theology essay and occasionally checking Twitter to see if a new ballot had completed. OK, honestly, it was a little more than occasionally.

One time I hit reset and the whole screen said “Habemus Papam,” “White Smoke,” and similar statements. There was no way everyone could be tweeting that without it being real! I jumped up, and started running for the door, stopping only to hit the bell enough times to alert the other 200 people in the Center for Higher Studies. The first 30 of us managed to catch the city bus that was just leaving and then take the metro.

I slid through the crowds to get a little over halfway up St. Peter’s Square – right before where the straight sides open up to semicircles. There we waited in anticipation. Then the curtain opened and a Cardinal declared “Jorge Mario Bergoglio” was elected and had chosen the papal name of Francis.

I know enough Latin to translate “Francis” but I started asking “Chi è?” (Who is he?) to those around me. He was not one of the three I was expecting. Fortunately, one of the Italians near me had read publications that were better at guessing the next Pope and described him quite accurately as from Argentina, a man of the people, and an evangelizer.

Then he came out and started with “Buona sera” (good evening). History tells us that till John Paul II, Popes just gave a blessing on this occasion. John Paul II gave a short 165 words and Benedict 86 words: both talking about their predecessor and indicating they took on the mission with great humility. Francis went far beyond that with 320 words even counting the Our Father, Hail Mary, and Glory Be he prayed with everyone else.

As I walked out of the square towards the bus station, a random reporter asked me if Francis was the first non-European Pope. I remember being taken back because we all know that St. Peter was the first pope and he wasn’t European. Nonetheless, I realized she must not have been a regular Vatican reporter. I explained to her that there had been previous Popes from the Mediterranean basin long ago and it would be far easier and safer to simply say “the first pope from the Americas.”

Inauguration was set for a week later and school was canceled, as you might presume at a Pontifical University in Rome. The night before I was invited to a reception at the Canadian college in Rome. Card. Ouellet was there and seemed quite relaxed – I figured he felt relieved as didn’t have to wear white. I caught a picture of him with the governor general, who led Canada’s official delegation, and a cabinet member who’s a serious Catholic. (Interesting aside: I uploaded this picture to Wikipedia and it currently appears on the Wikipedia page of each of the three people pictured.)

I remember the morning of the inaugural Mass as well. I don’t remember the homily but I do remember a few things. I remember how excited these pretty normal Italians were over a Pope who seemed more relatable to them. I remember how he went around the whole square before heading the Pope Mobile and greeted everyone. I remember when he came out in an extremely simple miter and chasuble – simpler then I probably seen at the average ceremony had been at with a Bishop.

I remember his deference towards the patriarch at the end which – through repeated meetings – may be has lasting legacy if he pulls off reunification. If he even makes major steps towards reunification which a later Pope concludes, that would be one of the biggest moves of the papacy in hundreds of years. At the moment, I didn’t realize that this was the first time in over 1000 years, and that makes it even more dramatic.

At this point, we didn’t know much about Pope Francis – the first reporters were flying to Argentina to interview family members, and publishers were getting translators to work full time on anything he’d written – but we did see the basic traits of his papacy. We saw someone who went out to reach people. We saw someone who spoke in more casual language invoking direct issues rather than theological prose. We saw a Pope who was a media sensation which I had a premonition would discredit him with certain circles who see secular media as part of the enemy. We saw someone who would do unexpected things from taking the bus with the other Cardinals, to picking up his own bags from the hotel and paying his bill.

We still have a Pope will do or say unpredictable things but in four years some of the things he does have just gotten “normal” so those of us who follow him closely are no longer surprising.