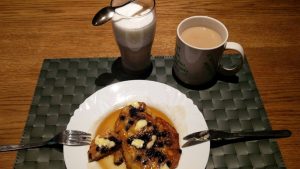 While breakfast is important, prayer is even more so! My friend Will saw this “Prayer Process” by Dynamic Catholic and emailed it to me. He reflected, “Great way to increase your devotion to God and truly find a deeper relationship with God.” It can be the breaking of the old habits and be a new way of engaging in prayer with God! Perfect to start using this during Lent!”

The Prayer Process by Matthew Kelly
1.      Gratitude: Begin by thanking God in a personal dialogue for whatever you are most grateful for today.
2.      Awareness: Revisit the times in the past 24 hours when you were and were not the-best-version-of-yourself. Talk to God about these situations and what you learned from them.
3.      Significant Moments: Identify something you experienced in the last 24 hours and explore what God might be trying to say to you through that event (or person).
4.      Peace: Ask God to forgive you for any wrong you have committed (against yourself, another person, or him) and to fill you with a deep and abiding peace.
5.      Freedom: Speak with God about how he is inviting you to change your life, so that you can experience the freedom to be the-best-version-of-yourself.
6.      Others: Lift up to God anyone you feel called to pray for today, asking God to bless and guide them.
7.      Pray the Our Father