Big brother is closer than you think 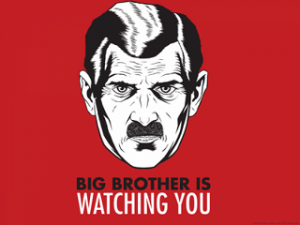 “For, after all, how do we know that two and two make four? Or that the force of gravity works? Or that the past is unchangeable? If both the past and the external world exist only in the mind, and if the mind itself is controllable – what then?”— George Orwell, 1984

This might be a good time to re-read “1984.”  Of course, if you are among the younger generations, you might have missed this important book…better catch up.  It is a clever story about how totalitarian government creeps up and enslaves a population.

Hint: controlling people depends in the end on manipulating how they think, which starts with making sure there are consequences for thinking the “wrong” thing.

This wasn’t invented nor discovered in 1984.

Hitler spent a good deal of time in the 1930s and 1940s persuading an entire nation how to think.  And in light of the holocaust, he apparently was fairly successful.

The Soviet Union convinced its people that communism would bring them a workers’ paradise.  That didn’t work out so well.

Of course, there was a group of rulers more than 2000 years ago, who were so upset by someone thinking the wrong thoughts – and sharing them publically – that they nailed him on a cross.

But they didn’t start big.  They started with a lie here, a suspicion there, a threat that those who disagree with the government line might lose a job, a pension or a contract.

Today, it has taken hold on our college campuses, with high schools close behind.  We joke about “political correctness,” but google “college thought police” and you should be frightened by what you find.

At Clark University, students must take care not to show a surprised expression if a fellow students says something that they disagree with.

Students at the University of Oregon are investigated by school authorities if they say something that another student says reflects bias.

Some school are actually putting students through orientation programs to discourage them from saying spiteful things like, “Merry Christmas.”

This might sound like harmless silliness; it certainly can’t lead to serious threats to freedom, right?  However, if a student at a university has to measure every word he utters for fear of reprisal, education has become indoctrination.  The end game isn’t a wise graduate but a compliant, useful idiot.

Of course, there are other minds to capture beyond the campus.  If the power hungry are worried about what campus hipsters think, imagine their concern about non-compliant statements by “subversive” elements such as the Catholic Church.

As Orwell said, “Big Brother is Watching You.”  And he is closer than you think.