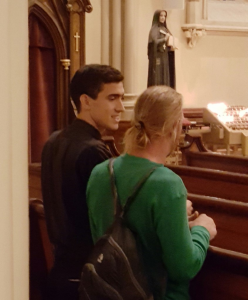 During our missions in NYC, we caught Br. Peter at the back of Old St. Pat’s praying the rosary with a passerby.

Praying with someone, sharing each other’s struggles, is the best way to evangelize.

Next time someone shares a difficulty with you, invite them to pray right there and then. You’ll be amazed at the power the Holy Spirit will unleash!