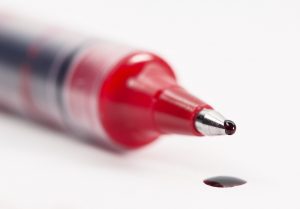 It was the same red pen that I first received when I arrived to our formation center in Greenville, RI: Mater Ecclesiae College, entering consecrated life in Regnum Christi. I found it on the desk assigned to me in the “first years’ classroom”, along with a black pen, a blue pen, and a 3-ringed binder.

The black pen probably ran out of ink within the month…especially thanks my intense Sacred Scriptures class and “Introduction to Christian Anthropology.”

The blue pen probably lasted a little longer; I used it less. And the binder lasted me all though my four years there at MEC, after which I traded it in for a BA in Religious and Pastoral Studies.

But the red pen…I brought it with me to Texas. Houston, Texas. It was a color I didn’t need or use much, only to circle, star, or set apart a word, text, or concept.

The last week here in Rome, after the past 3 months of intense preparation for final vows, it was finally used up. Six years later.

There aren’t many physical objects I still have from my first year of consecrated life, and so even though a red pen might seem insignificant, there was a moment of hesitation and nostalgia before dropping it into the trash can. Not because I was attached to it in any way, but it suddenly spoke to me as a symbol of my journey from those beginnings to now.

Red pen — to set apart a word, text, or object.

Just like my consecration does for me — sets me apart, totally and entirely, for Christ and for His Kingdom — and then sends me back into the midst of the world to be His gaze, presence, and voice.

Please keep praying for me as the day of my final vows– September 8, 2016 — approaches!