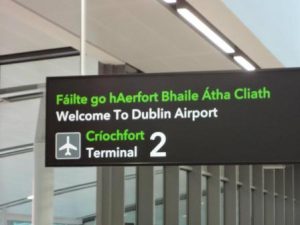 Two things have surprised me during my first two days in Ireland, of the three weeks I will spend here helping with the Woodlands Academy Summer Camp. The first was when I arrived to the Dublin airport and all the signs were in Irish and English.

The part that surprised me wasn´t the Irish—it was the English.

To be honest, it started a little before that. On my Ryan Air flight, I kept responding to people in Spanish out of habit. After a minute I would realize that they were Irish, and that I do in fact still speak English. So I spent the flight clumsily replacing gracias with thank you.

That´s why the English was what surprised me in the airport. I hadn´t left Spain for my entire first year (actually this Monday was my second time in the Madrid airport, the first being when I arrived last August), so I think I had a few hours of culture shock realizing that I should respond to people in English again.

As the priest started Mass the next morning “In the name of the Father” and not “En el nombre del Padre”, I realized I´d be going to Mass in English for the next six weeks. I actually did have to think twice about when to kneel and stand.

But at the same time, I´m around a lot of Spanish speakers…and when they ask me if I speak Spanish, I surprise myself by answering “yes”. It´s reminiscent of what they call being out-of-body, when I´m watching someone who can´t possibly be me, not being scared of the conversation switching to Spanish, and clumsily re-adjusting to English.

One Response to Irish Surprises