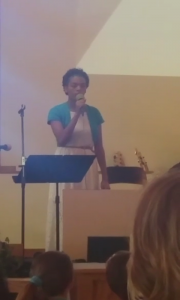 A few days before heading to Rome for the summer, I stopped through Hartville, Ohio to visit my family. Twelve-year-old Miriam and ten-year-old Isaiah had a piano concert Sunday afternoon, and we went as a family to see them perform.

I hadn’t realized that Miriam would also perform a solo, singing “Not About Angels” by Birdy. The past year she had been taking voice lessons, at the village church down the road.

We kids knew she was good…but we didn’t know Miriam was that good.

As she stood up there, it suddenly struck me how music had been a means for her blossoming as a person the past year and a half. Through it, she found her niche, something she was really good at, and that was uniquely her own talent. Being the second youngest of nine kids, that’s important.

Then I started realizing: this was the same girl, who only nine years ago, had found herself at an orphanage in Ethiopia, Africa- hoping for a family, a future. This same girl, was brought to the United States, not speaking or understanding any English at the age of three, and began a new life in a new family, new culture, new environment.

Here she was- after having overcome difficulties and challenges- and before facing new ones as she grows.

“Don’t give….me up”. The chorus she sung, with all the passion of her heart, spoke to me of her past, her present, and her desire for the future.

God’s never finished with us. He has a plan- a future. When we believe that for ourselves, our lives, and in others, it changes everything.