Alex’s Prayer from the Choir Loft 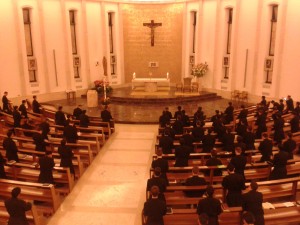 On tiptoes and whispering, we were all trying to make as little noise as possible. We didn’t want to distract the priests and brothers praying below.

During the Rome pilgrimage in April, our Northwoods Catholic School students and families had the grace of sharing a holy hour with the communities of the Center of Higher Studies- the Legionary seminary in Rome.

I had a handful of the kids kneeling along the choir loft railing, looking out at the Eucharist exposed and down at the hundreds of men in black in the chapel below.

Little Alex was one of them.

He was a joyful tag-along. His older sister was in 8th grade, and so because of her, he got to join the trip.

But it had been a long day- a long week for the little guy with the early mornings and miles of walking. At first he peeked over the choir loft railing and peered around, but then eased back and sat on the ground, cross-legged on the marble ground, with his hands cupping his face.

“Hey Alex,” I whispered over.

His head whipped up. “Yeah?”

“Check this out.” I went over to where he was, peering out over the railing with him again. “See all those priests and brothers?”

“Guess what? They are from ALL OVER the world.”

“And you know what? ALL of them left THEIR COUNTRIES behind to come here- to follow Jesus. They left their countries!”

“And you know what else? They didn’t just leave their countries. They also left their FAMILIES behind to come here.”

His eyes got even wider.

“Isn’t that incredible? Jesus must really be worth it. Don’t you think?”

He nodded his head, still soaking it all in, with a look of amazement.

“Do you think we can pray for them, so they can keep following Jesus wherever he takes them?”

With that, the 4th grader knelt down, clasped his hands together, and bowed his head for the most fervent-looking prayer I had seen that day. For a whole 30 seconds, he remained motionless. Then his head popped up, and he looked over to me with a big grin on his face.

Way to go, Alex. Keep praying for our priests and brothers.