This morning I had to help 4 Calgarians to get to the priestly ordinations. I got to their hotel and we were on the Metro when they suggested a little stop before St John Latern. They were only going to be here a short while and wanted to see the Holy Cross of Jerusalem.

We hurriedly walked the 10 minutes from the Metro to the Holy Cross, passing right in front of St John Latern where the ordinations were to happen an hour later. We slipped into the back of the church. The Holy Cross (Santa Croce in Gerusalemme) is famous for a side chapel in the back that contains relics of the passion: 3 small parts of the true cross, two thorns from the crown, a fragment of the pillar where Christ was scourged, Thomas’s finger that entered Christ’s side, a nail form the cross, a large piece of the cross bar good thief’s cross, and 1/3 of the title put above Christ. We stopped a few minutes in silent prayer.

When we got back to St John Latern, we settled for seats a little further back. 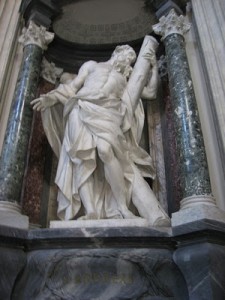 The Holy Cross seemed like a minor excursion until during the Kyrie (Lord have mercy) the camera paused a long while on the colossal statue of St Andrew gracing the left side on St John Latern (see above). The cameraman seemed to focus on his face peering at the cross. The excursion now made sense.

Victimhood is not an end in itself; no one would choose to be a victim on his own. Instead, as Catherine Dohrety said: “A priest is a man who is crucified to himself / so that he may be lifted up / and draw all things to Christ.” We become victims to participate in Christ’s redeeming mission.

In the homily, Card. De Paolis pointed out that every Catholic priest participates in the one eternal high priesthood of Christ. They may Christ present in his word and through the Eucharist, they lead us heavenward. Please pray for each of the new priests who are to continue this mission of Christ as an Alter Christus, Altera Hostia.