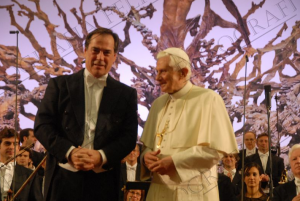 About midway through last week, a brother comes up and asks me if I am going to the concert on Saturday. Shrug. I have Van Gogh’s ear for music so it didn’t excite me. Plus, it’s modern classical which you often need to study to understand.

Even with the Pope there, 2 to 3 hours of waiting, and 1 hour of music I don’t understand for a 5 minute discourse of the Pope which is mainly just thanking the orchestra didn’t seem exciting enough to commit.

Saturday came around and I found out we were all going. OK, I can live with that.

The brothers I waited for the concert with had a very stimulating conversation regarding the relationship of philosophy and theology, among other things. When the Holy Father came in, we all squeezed over towards the railing and I almost shook his hand. (I probably could have but would have squished the short sister whose shoulder my hand was stretched over.) The music was quite good. One piece stood out, Don Juan by Strauss, which represented the futility of a life chasing passing pleasures.

Boy, I am glad I went even though initially I didn’t want to.